Bruno Griesel became a master student of Bernhard Heisig at the Leipzig Academy of Visual Arts in 1986, precisely the year when Heisig, one of the most important painters of the GDR, also became known to a wider audience in West Germany with his official portrait of the then Federal Chancellor Helmut Schmidt. After Griesel had slowly shaken off the Heisig style, a grey, serious, existential painting, he found around the mid-1990s a colourful, enormously sensual way of painting full of symbolist and allegorical tendencies, the content of which repeatedly revolved around the theme of gender relations. Women and men (most prominently always women) come into the picture as single figures, in constellations of two, three or four, their bodies seeming to burst with vitality, which is evident not least in their idiosyncratic anatomy.

Around the turn of the millennium, a noticeable change can be seen in Griesel's art, a break in form and content. His painting style became calmer, cooler, more detailed, the content more intellectual. Sensual, direct themes were replaced by sometimes very elaborate, complex, often enigmatic scenes, in which not only the artist's knowledge of art history appears, but also his wide-ranging interests in mythological, scientific, philosophical, theological and, more recently, music-theoretical questions are reflected. Where the pictorial spaces in the 1990s were mostly undefined and vague, now exterior and interior spaces full of symbolic references and still-life-like richness of detail opened up. In general, the still life became an increasingly important pictorial genre alongside the figure scenes. Griesel's painting developed in constant confrontation with art history. In several works he dealt with Kasimir Malevich's "Black Square" as one of the founding icons of modernism in an equally witty and critical manner. A surprising constant in his work since 2000 is his intensive preoccupation with Rococo art. 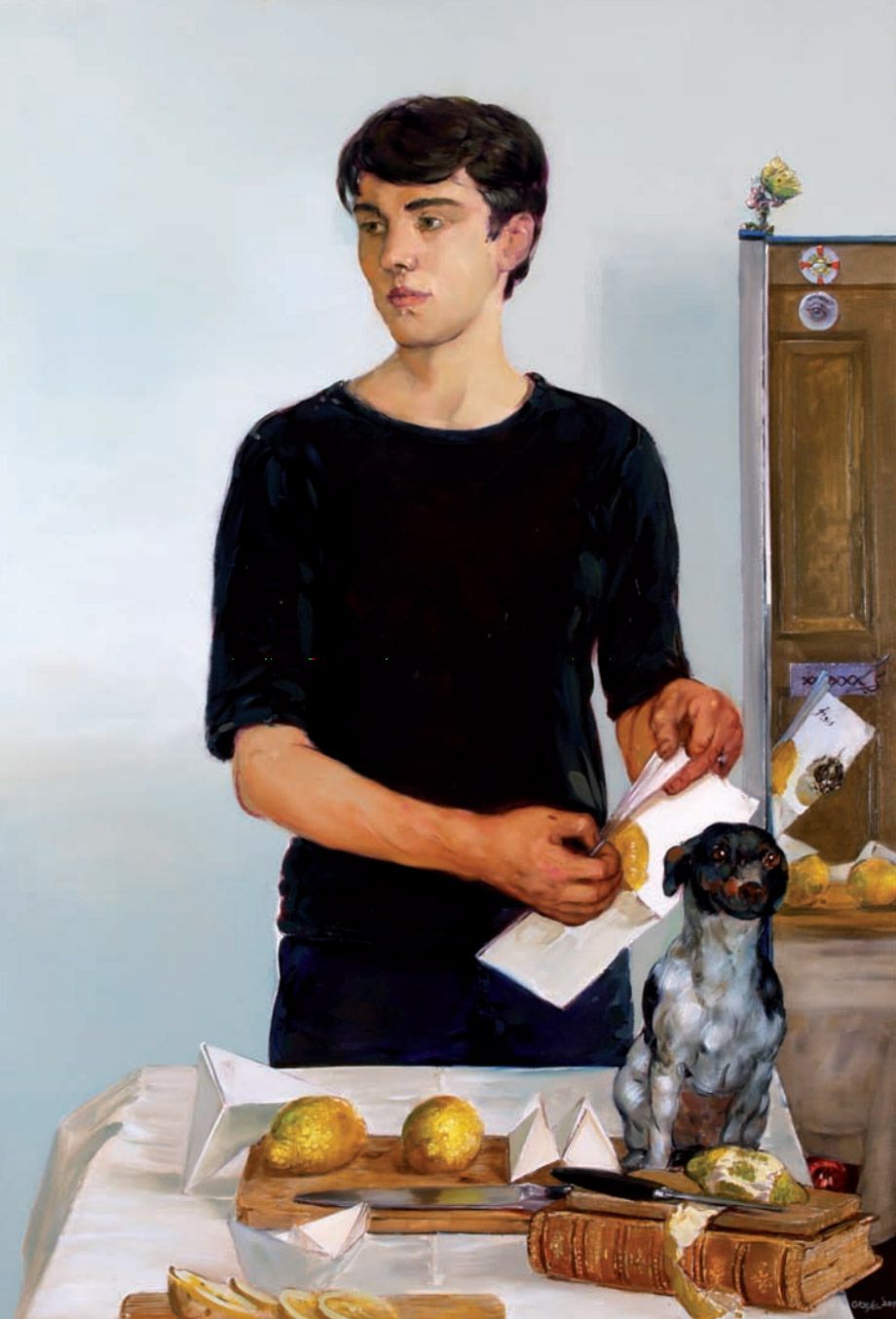 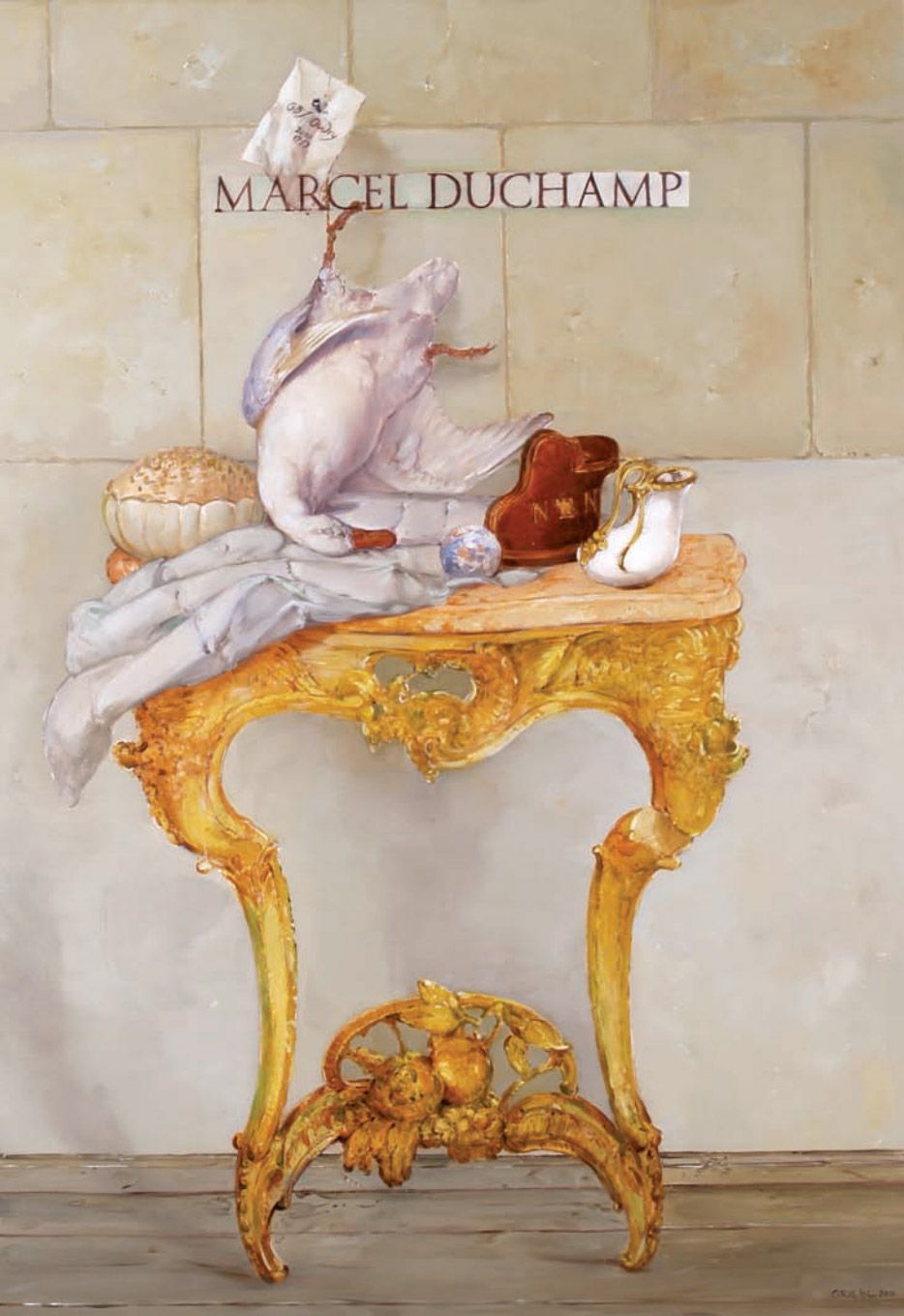 Surprising in that this style of the 18th century had a hard time for a long time, both among art historians and the general public, since the Rococo was considered frivolous, frivolous, superficial, arts and crafts, ornamental and overloaded - rather a decadent-aristocratic style than the art of the "middle class".

What still fascinates Griesel about the Rococo is, on the one hand, its elegance and sense of form taken to an extreme, but on the other hand, apparently also the parallel to today's (post-)postmodernism with its eclecticism, tendency towards the theatrical and the loss of the binding nature of absolute truths, which Jean-Francois Lyotard described as the "end of grand narratives".

Griesel is also infected by the "maladie de porcelaine", the passion for "white gold", which was widespread in the 18th century: In his paintings, porcelain figures are repeatedly found as motifs, for example the pair of white peacocks in "Pierrot: Mask and Person" from 2010, which are carried by an empty, floating, also white Pierrot costume. Mysteriously, one of the peacock's feathers takes on a coloured shape; it seems as if the "divine white light" is breaking into real life (one must always keep in mind his familiarity with Goethe's theory of colour when looking at Bru-no Griesel's paintings). The cut ham on the table, on the other hand, unmistakably points to the principle of incarnation, of becoming flesh.

Theological motifs are hinted at here, even more directly in the still life from 2013, painted with bravura, which shows only three red apples and a silver-coated Art Deco coffee pot on a wooden table. The careful arrangement of the apples, which are each placed with the stem facing outwards, inwards and upwards, suggests a symbolic content - the hunch becomes certainty in view of the initially enigmatic title "The Question by the Sea".

The title alludes to the well-known legend about the church father Augustine, who is said to have encountered a boy on a walk by the sea who was trying to scoop out the sea with a spoon.

When asked by Augustine about the impossibility of doing this, he received the answer that his own attempt to understand the essence of the divine Trinity was no less futile. Allusions to the Trinity occur again and again in Griesel's work and in the most diverse forms. One can understand "The Question by the Sea" as an experiment: How does the perception of a painting change when a symbolic interpretation of the motifs is offered? Is such a reading binding or does it depend on the attitude of the viewer and his willingness to engage with theological questions at all, for example?

Griesel's paintings, especially the complex large formats, are highly conceptual - not in the sense of 20th-century conceptual art, but rather concetto or inventio, the witty invention demanded by Renaissance and Ba-rock art theory. Three examples of this should be briefly mentioned here, firstly "The Hunt, 2:3" from 2009. Here, two hunting dogs charge from right to left in an open landscape. The apparently understandable motif becomes recognisable as an allegorical one as soon as one notices that on the right there is an old view of New York from the 18th century and that today's Wall Street is reflected in the puddle on the left. The dogs run through the centuries, driven by hunting zeal. Their symbolic content suddenly becomes clear when one sees the scroll with the inscription "Financial Market" at the bottom right: Dynamism, greed, craziness as motors of an ever accelerating social development. (The picture was taken shortly after the insolvency of the American bank Lehman Bros. which, as is well known, triggered a worldwide financial crisis). Even the strip of grass in the background is not only what it first appears. If you look closely, you will notice that the sequence of stalks and dandelions is repeated. It is a double quotation of the famous "Great Lawn" by Albrecht Dürer painted in 1524 in the Alber-tina in Vienna. Griesel himself points to a symbolic meaning by referring to the biblical line 1 Peter 1:24, which is also sung in Johannes Brahms' "German Requiem": "For all flesh is like grass, and all the glory of man like the flowers of grass." Are the three handbells floating in the picture again a reference to the Trinity? Are the blind historical dynamics of an unleashed capitalism relativised by a supra-temporal instance? 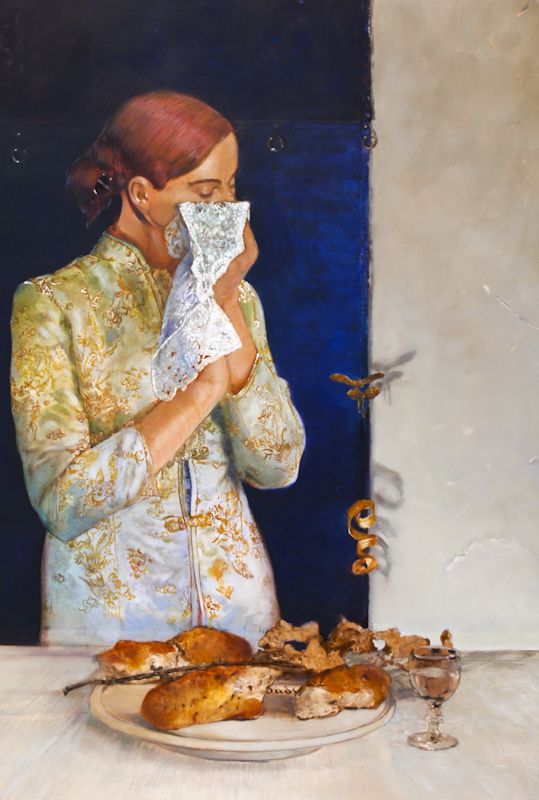 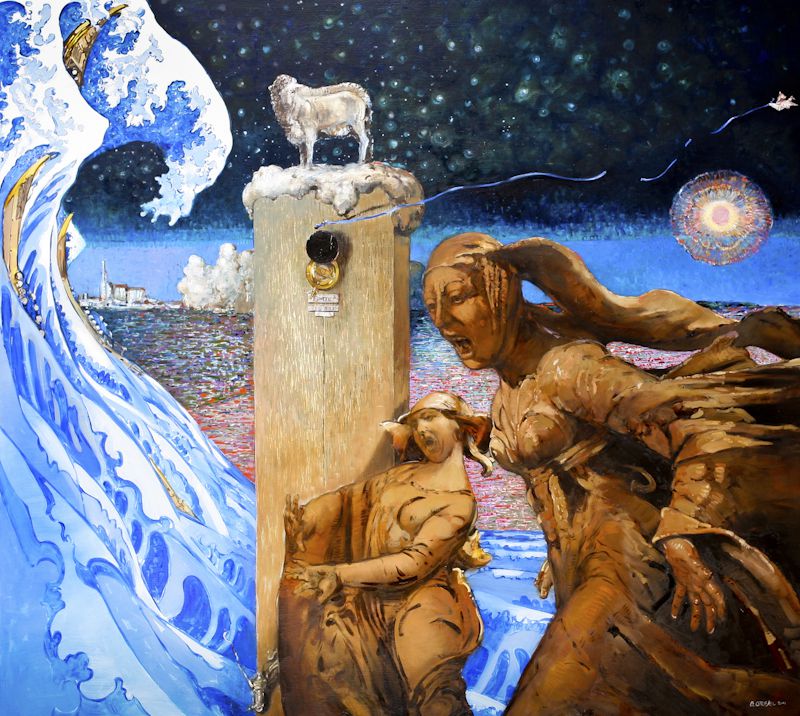 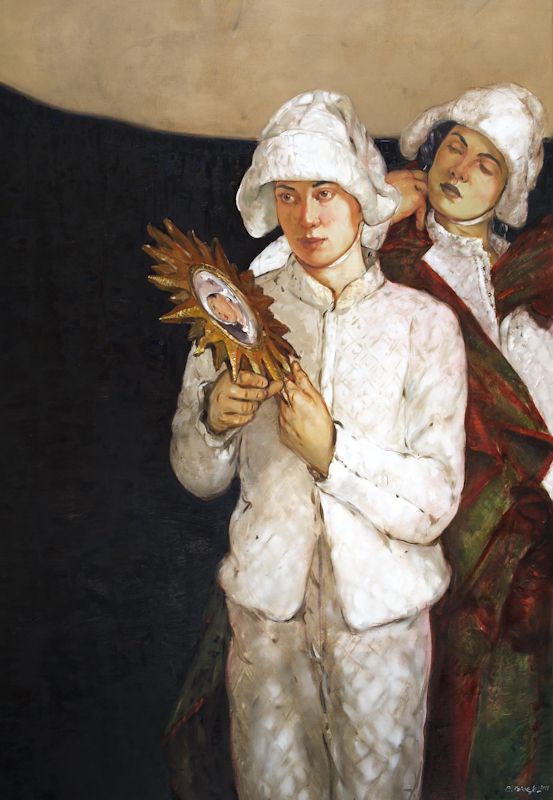 A particularly ambitious composition, the complexity of which can only be hinted at here in outline, is the painting "Schrödinger's Cat" from 2012. The pair of porcelain figures "Two Cats Playing" located in the centre of the large-format painting stands here for the famous thought experiment from 1935, which the Austrian physicist Erwin Schrödinger devised to illustrate the paradoxes of quantum theory. A cat enclosed in a sealed box would be killed with a certain probability by a poison capsule, the activation of which would in turn depend on the quantum event of a radioactive decay. According to the laws of quantum physics, the cat would be in an undecidable state between dead and alive until the moment of a measurement from outside. 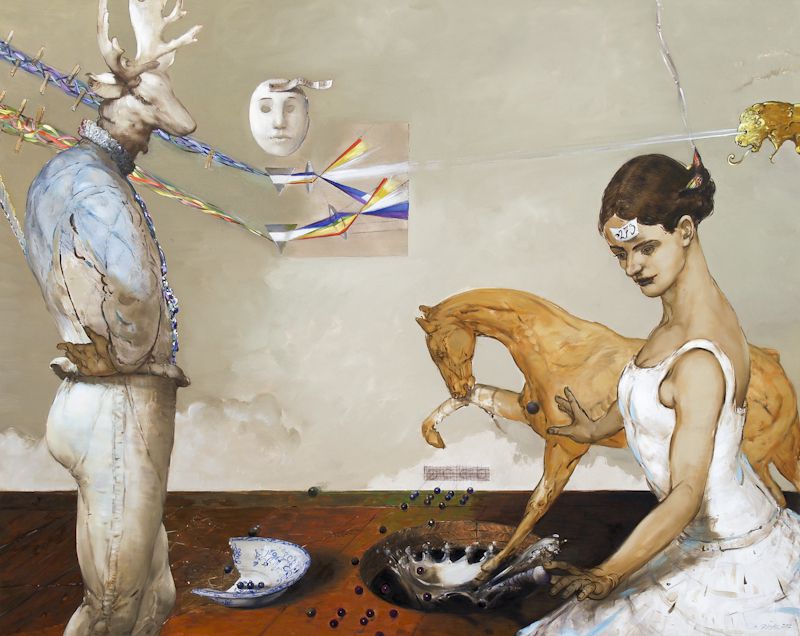 Griesel boldly connects this overlapping of life and death, which cannot be grasped by the everyday mind, with the old saying "Media in vita in mortem sumus", which is chiselled on the pedestal on which the experiment takes place. The aphorism probably goes back to ecclesiastical music of the 8th century and is best known in German version through the Luther chorale "Mitten wir im Leben sind, von dem Tod umfangen". Two nude female figures on either side of the painting show a different relationship to this interweaving of life and death (which could also be formulated biologically: in our bodies, processes of growth and decomposition take place permanently and simultaneously). While the figure on the right, brightly lit, rests completely in herself, in the here and now, the woman on the left, shadowed, knows about the connection between life and death, between beginning and end, which is recognisable by the fact that she carries de-ren symbols, an ostrich egg and a hollow, fragmented bust, in her arms. This makes her more knowledgeable, but also less protected against the onslaught of nothingness, of infinity, which enters the picture as a black background surface, than the figure on the right, who is shielded by yellow veils or cloths. The same theme is put into the picture in "Schrödinger's Cat" on several, very different levels. The whole thing takes place on an open landscape stage stretching to distant mountains. In a sense, the scene is a painted existential theatre in which the very big themes of life and death are negotiated. 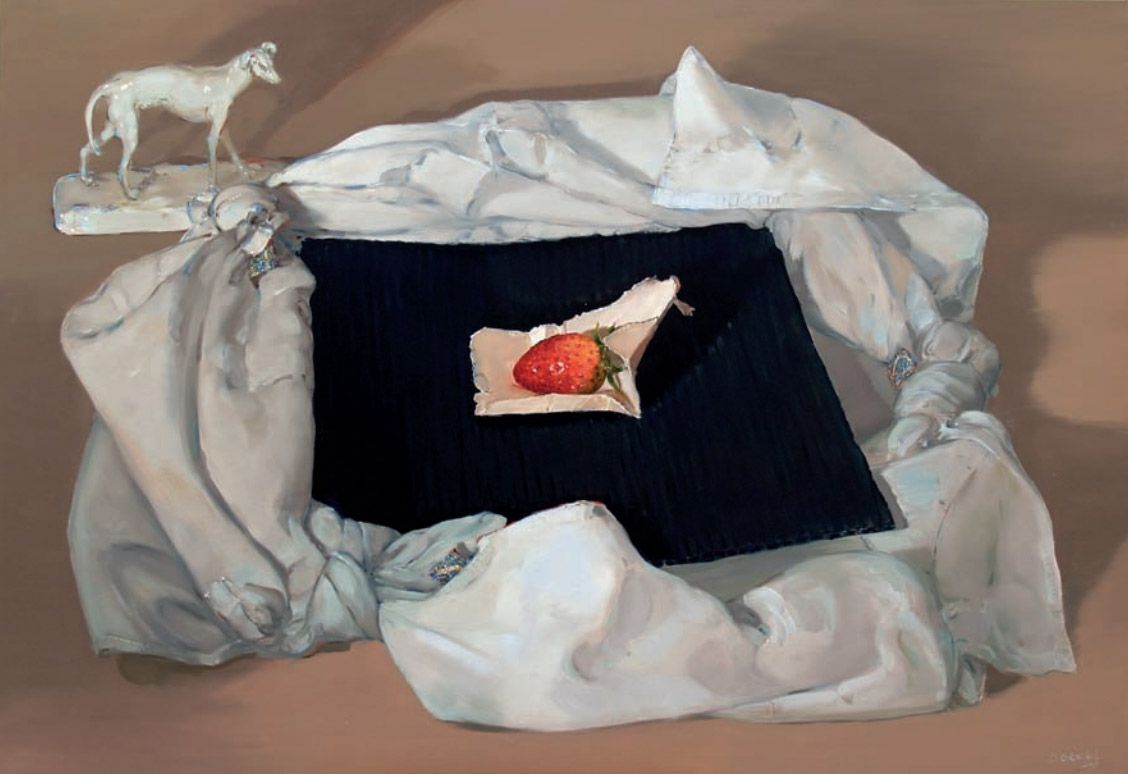 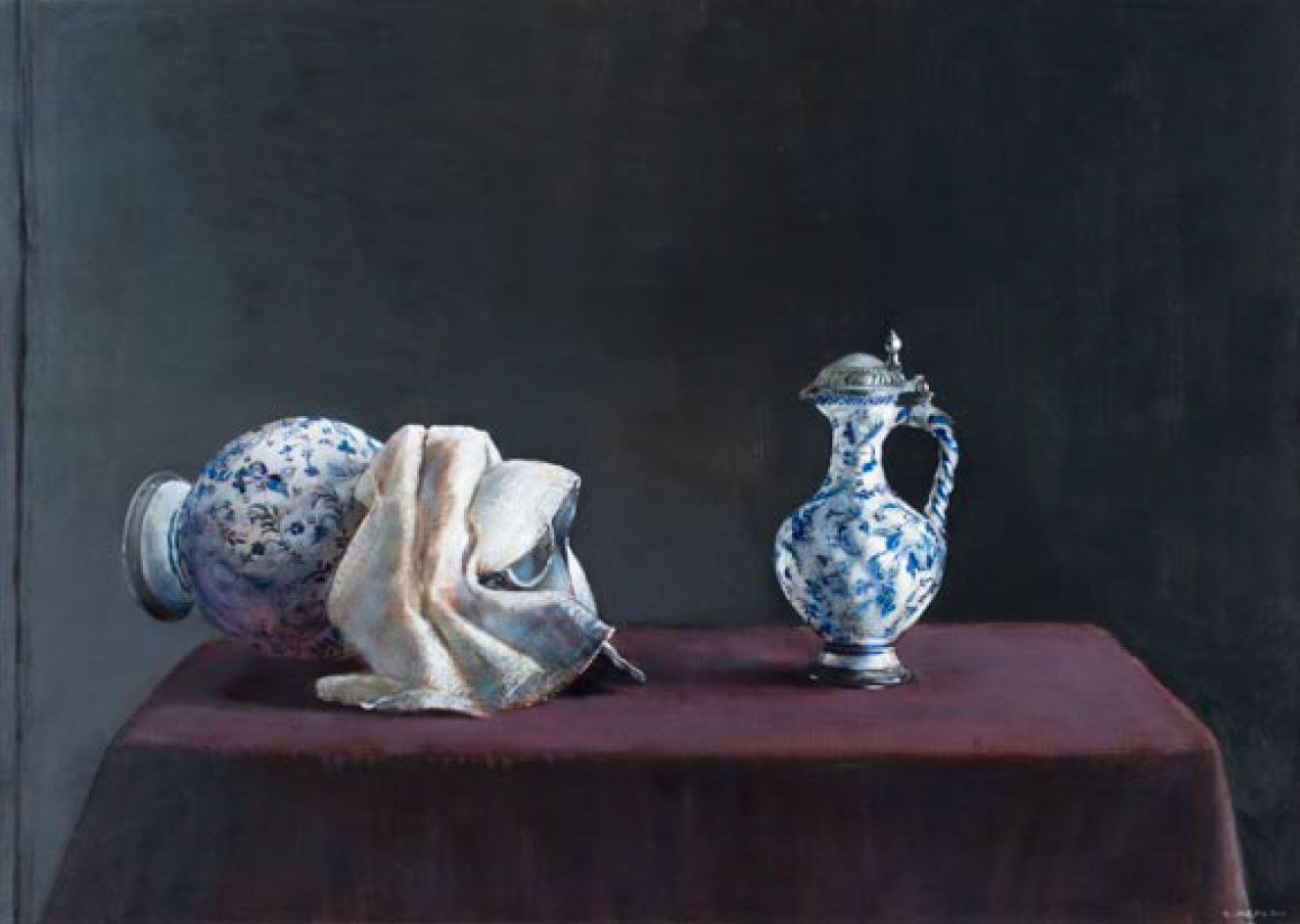 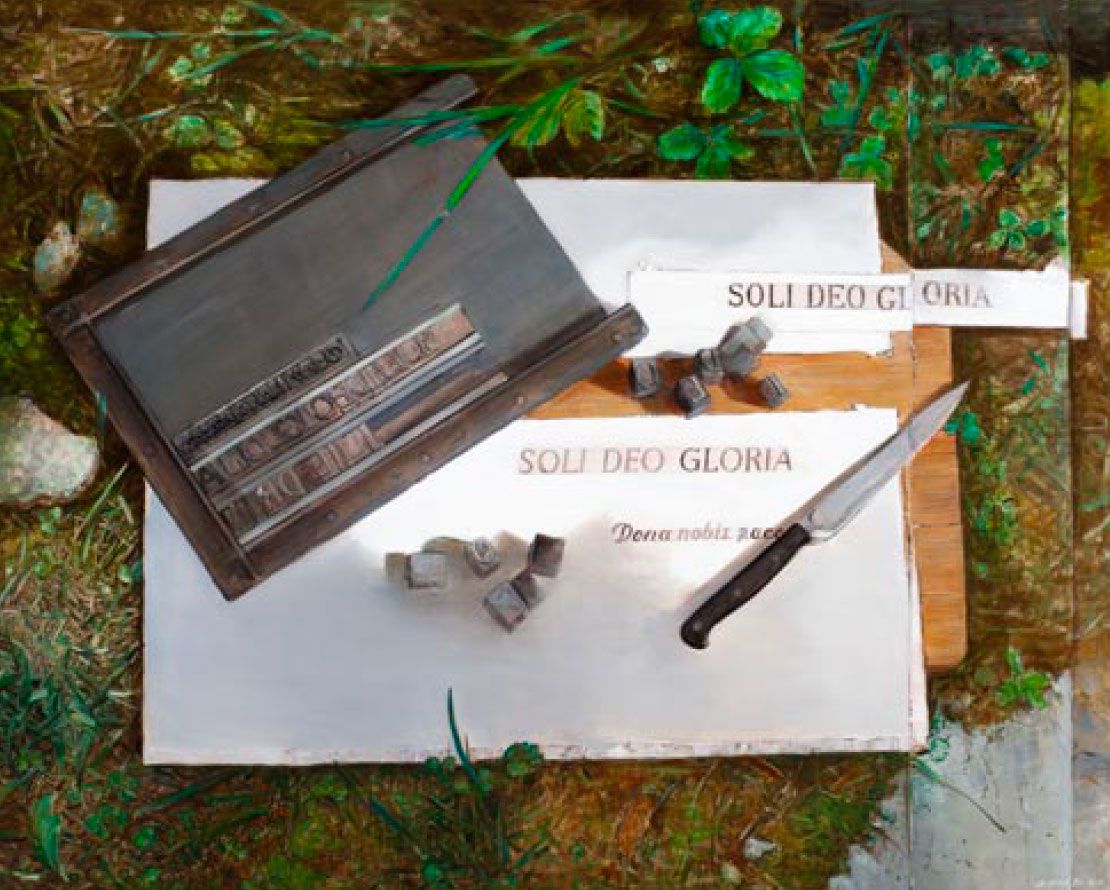 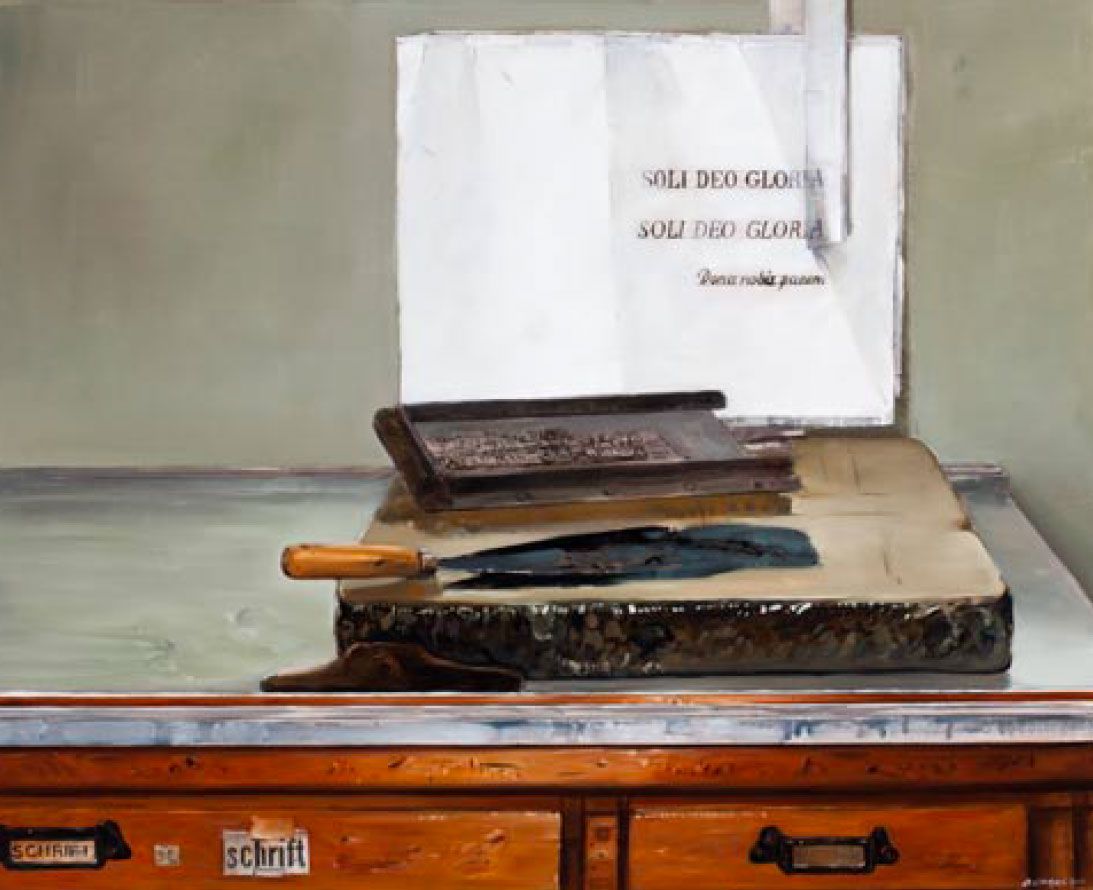