Introduction to the opening
of the Exhibition Variety

Ladies and Gentlemen,
As an art theorist, I am very pleased to have the honour of making a few brief technical remarks on the artist Bruno Griesel and his work at today's exhibition opening.
First of all, I have a question for you: do you know these symbols? (Show Pi symbol) (Show Phi symbol)
You will certainly guess that these are Greek letters that are used as symbols or mathematical constants for calculating the circumference/diameter of a circle and as small and large phi in mathematics, physics, chemistry, geography and biology. But what does this have to do with Bruno Griesel and his artistic work?

For almost 30 years, he has been involved in numerous exhibitions around the globe. They took him and his works to New York in 2000, to Barcelona and Shanghai in 2003 and to Salzburg in 2012, for example. In this capacity, Griesel is always active as an artistic ambassador for Leipzig painting. This evening is no exception...

But let us come to Bruno Griesel's pictorial work: what is special about his painting and his great international success?
An important cornerstone is certainly the painter's connection and thematic examination of important epochs of art history from antiquity to the present. Bruno Griesel's painting style is narrative and often figurative, yet he reveals an idiosyncratic traditionalism, which in its mysteriousness challenges the viewer time and again.

Griesel transports the viewer into colourful and at the same time sensitive depictions of rooms and the people who act in them. Superficially, they appear to be expressionist-symbolist scenes. His figures appear in front of mythological or even biblical-looking foils and are subjected to a critical philosophical and psychological analysis in the interplay of the compositions.
Set pieces of various natural sciences as well as theological-philosophical approaches determine the compositions. Dualistic arrangements of forms and objects populate surreal spaces and puzzle the viewer. They appear contradictory and sometimes antagonistic.

The exhibition we have come to this evening is entitled Varieté. It suggests that Bruno Griesel's most recent paintings will take us into an extraordinary world full of spectacle and artistic, musical or dance performances. One of the central representations can be found on the invitation that you have certainly received. In it, Griesel motivically combines the illusion of "true seeing" in the form of the portrait. 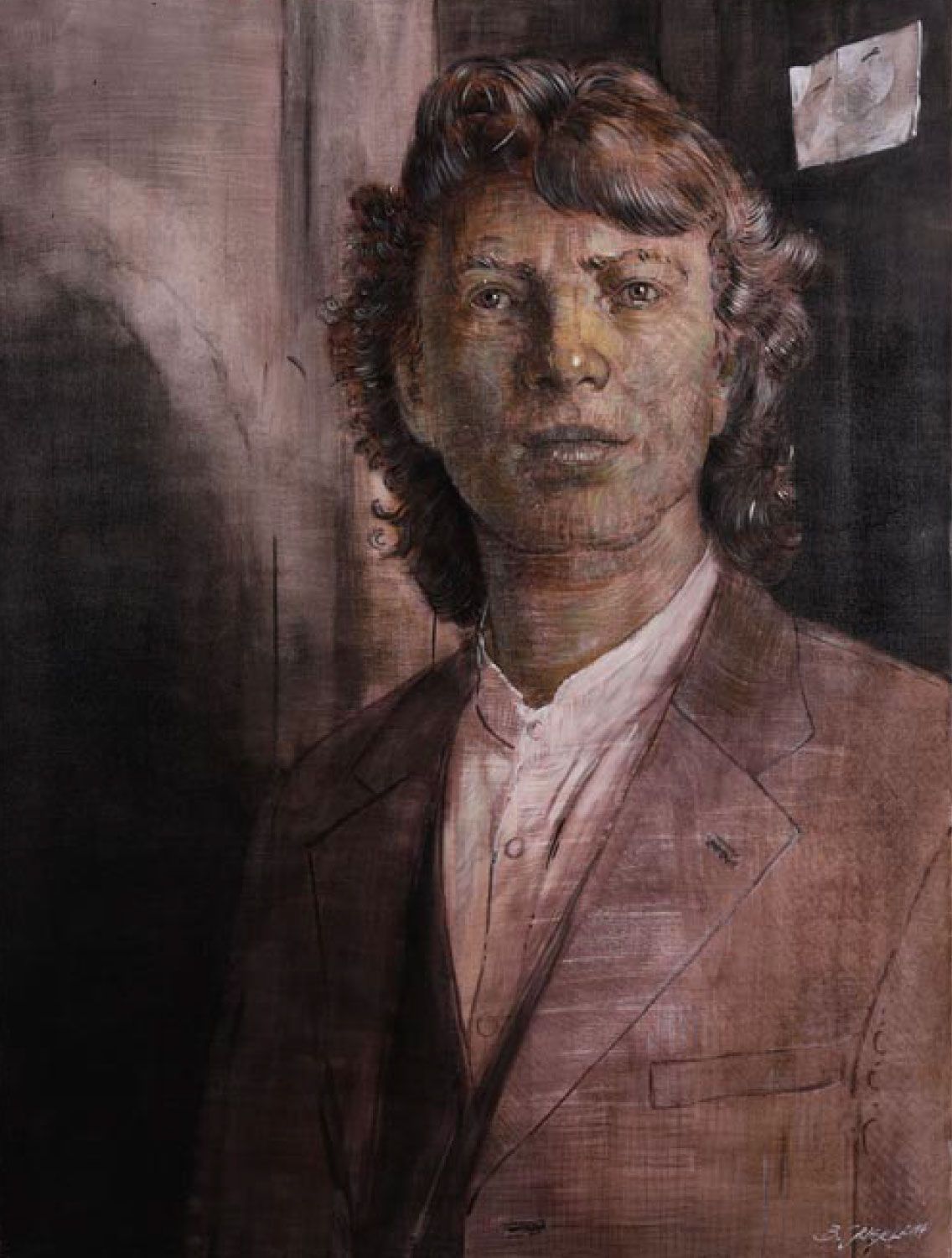 The person on the left in the picture is the well-known variety artist Stephan Masur. He has just conjured up a filigree air structure by means of interconnected soap bubbles, which hangs down from the soap bubble rings on his left hand. In the middle of the six bubbles, a cube-shaped structure is enclosed - this is how we see it as viewers.
Physically, due to surface tension, soap bubbles have the peculiarity of striving for the shortest connection when they meet, so that when six bubbles are connected, a rectangle or even a cube is formed in the centre. This is usually not visible to the eye because of the light reflections, but the artist Masur is able to blow smoke out of the fleeting and filigree centre by means of a small straw (which he holds in his right hand in the picture), so that an imaginary cube or the illusion of a cube made of air appears before the eye of the viewer.

Bruno Griesel banishes the fleeting magic without, however, disenchanting the trick of the "House of Wind". Every spell, however, requires a magician who can beguile the audience through concentration, skill and seductiveness. The highly concentrated gaze and the tense posture of the sitter demonstrate this. If we follow Masur's gaze beyond the central object, we recognise walls/panels in the background that project into the space of the picture, one behind the other, which repeatedly take up the geometric forms of the square and the circle. In their interstices, they combine the forms in a construction drawing of light and shadow to form a barely perceptible structure.

Further enigmatic scientific-philosophical and mathematical symbols stand on the colourful frieze of rectangles and triangles in the foreground of the picture, they are the symbols (Pi) and (Phi) shown at the beginning.
The depicted world of symbols and optical experimental set-ups refers us viewers to the perceptual theory of Gestalt psychology. Do you know what it entails? This approximately 125-year-old branch of psychology asks about the perceptibility of forms and how we recognise connections between things. The many schools of Gestalt psychology go back to the philosopher Chris-tian von Ehrenfels' formulation that perception involves qualities that do not result from the arrangement of simple sense qualities. Bruno Griesel takes up this abstract principle of perception in his work.

Seeing as a component of perception is thus constructed and evokes an idea. When we look at a picture, do we really all see the same thing? / What information from anatomical vision is actually transformed into an image by the brain? The teaching of vision stretches from antiquity to the present day.

Most scientists of antiquity, including Euclid and Ptolemy, assumed that so-called "visual rays" emanating from the human eye scanned the surroundings and thus created the visual impression in the brain, similar to a blind man scanning his surroundings with a stick. The Persian Alhazen (* c. 965 in Basra; † 1039 or 1040 in Cairo), however, approached the question in a new way by analysing the structure of the eye. He recognised the importance of the lens in the eye and refuted the theory of visual rays in scientific experiments. He also extended Ptolemy's theories of light refraction and light reflection; in particular, he recognised and described the suitability of curved glass surfaces for optical magnification. With these insights, he produced reading stones made of glass - the magnifying glass. Alhazen also carried out experiments in colour mixing and camera obscura.
The reminiscences in Bruno Griesel's work apply to those important optical experiments by Alhazen and his inductive-experimental scientific method. For Bruno, too, the experiment comes first, and the theory is derived from the results of the experiment.
But enough of theory.

Step into action and let yourself be captivated by Bruno Griesel's imaginative and brilliantly coloured poetic scenes, let yourself be enchanted by the actors in surreal worlds full of supposedly disparate traditional motifs, which in their interconnection function across epochs and tell exciting or even enigmatic stories of the myth of the world and its multi-layered development into the modern age.
Experience Bruno Griesel's imaginations made figurative, wander as a viewer through enduring ages up to the present and gain an idea of change and constancy, of time and eternity and the longing of art. 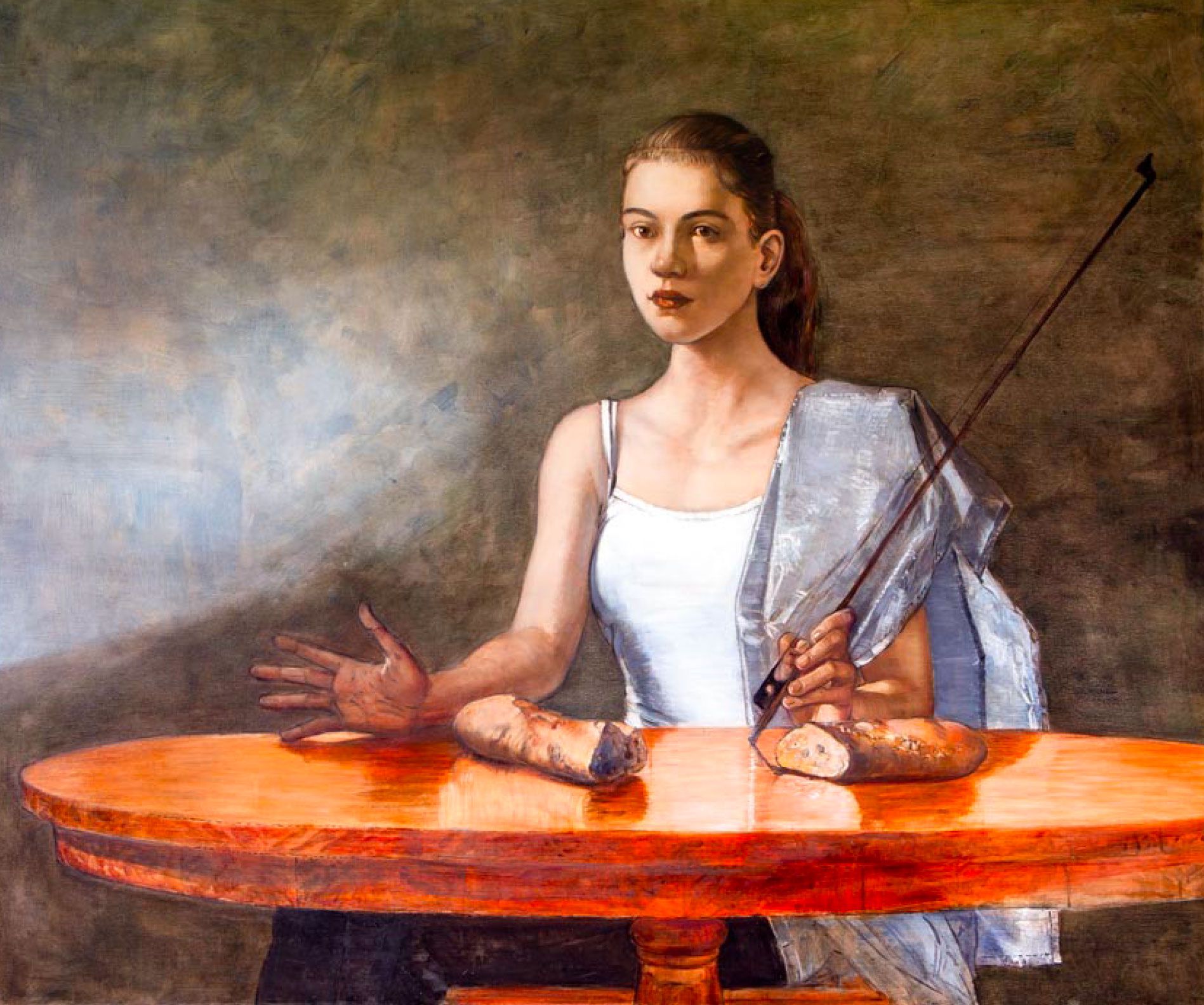 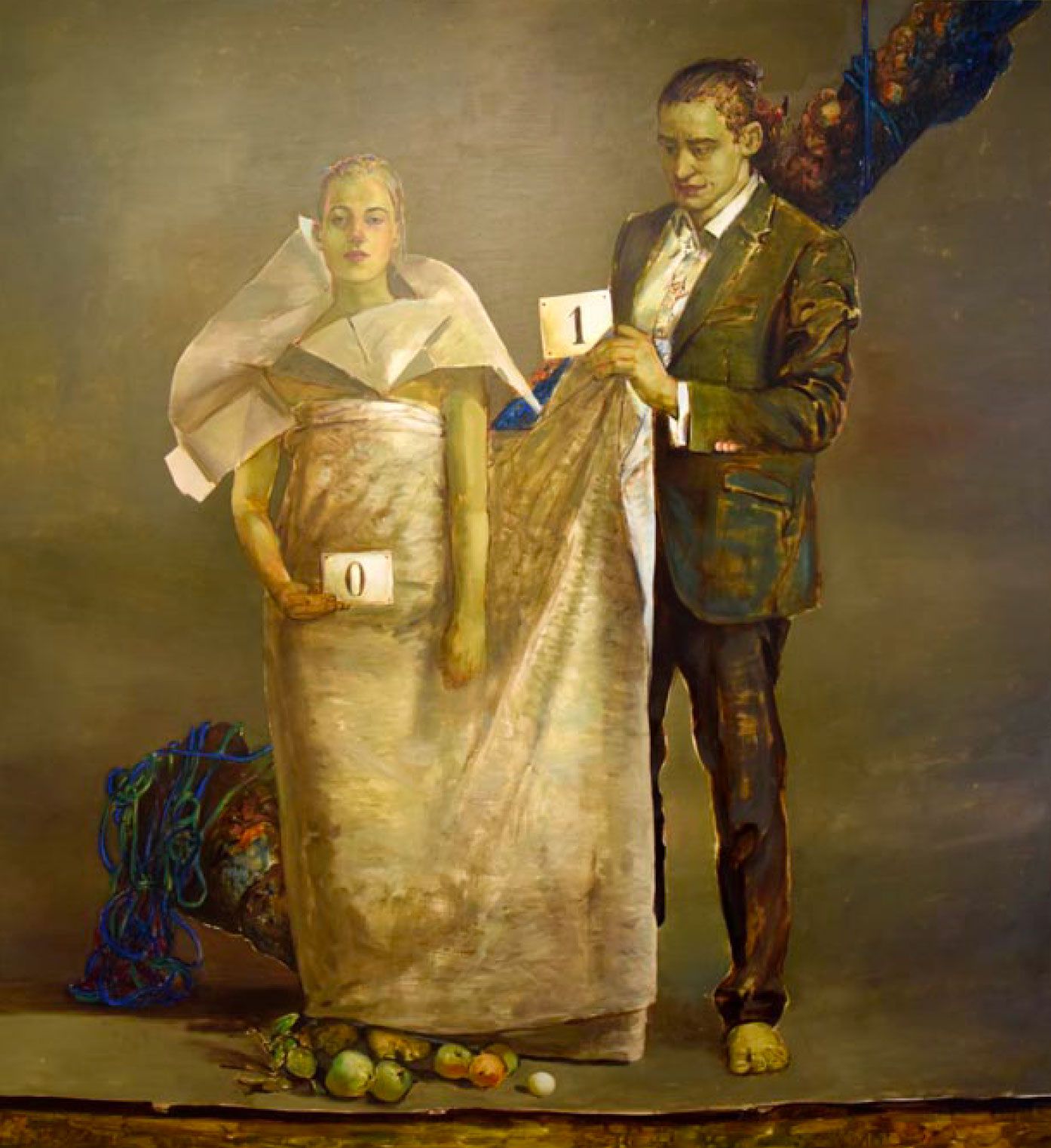 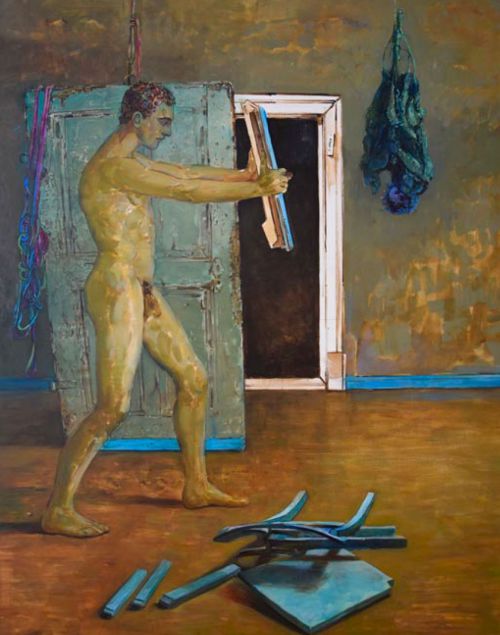