Tinnitus, the loss and
regaining of balance -

Bruno Griesel and the "Rococo

Art has always been the subject of art! Michelangelo copied antique sculptures, Rubens paraphrased Titian, Magritte ironised Manet. With true obsession, Picasso reproduced pictures by Cranach, while Arnulf Rainer obsessively painted over reproductions after Vincent van Gogh. In one action with paint and brush, he also attacked the paintings of colleagues.

The countless replicas in art history reveal a lot about the concepts and intentions of their creators: Peter Paul Rubens, for example, tried to appropriate the manner of Titian, whom he admired, even revered. Arnulf Rainer, on the other hand, attacked the artistic artefacts, the overpaintings aiming to erase the models. 20th century artists in particular were not free of "arbitrariness, aggression and parody" in their appropriations; Arnulf Rainer is by no means an isolated case with his attacks!

Like countless painters before him, Bruno Griesel also dealt intensively with history - but there is no trace of parody or aggression in his work: quite the opposite. Full of curiosity, he turned to famous colleagues of the past; a kind of empathy seems to drive him in his pictorial actualisations. However, his variations and alterations of well-known works of art, his pictorial paraphrases are by no means a harmless game: the reference back to art history is rather rooted in a very personal history of suffering. Central to his art of transformation is the intense homage to the 18th century. He calls his project "Rococo", which he began in 2005 - and which now comprises numerous paintings. 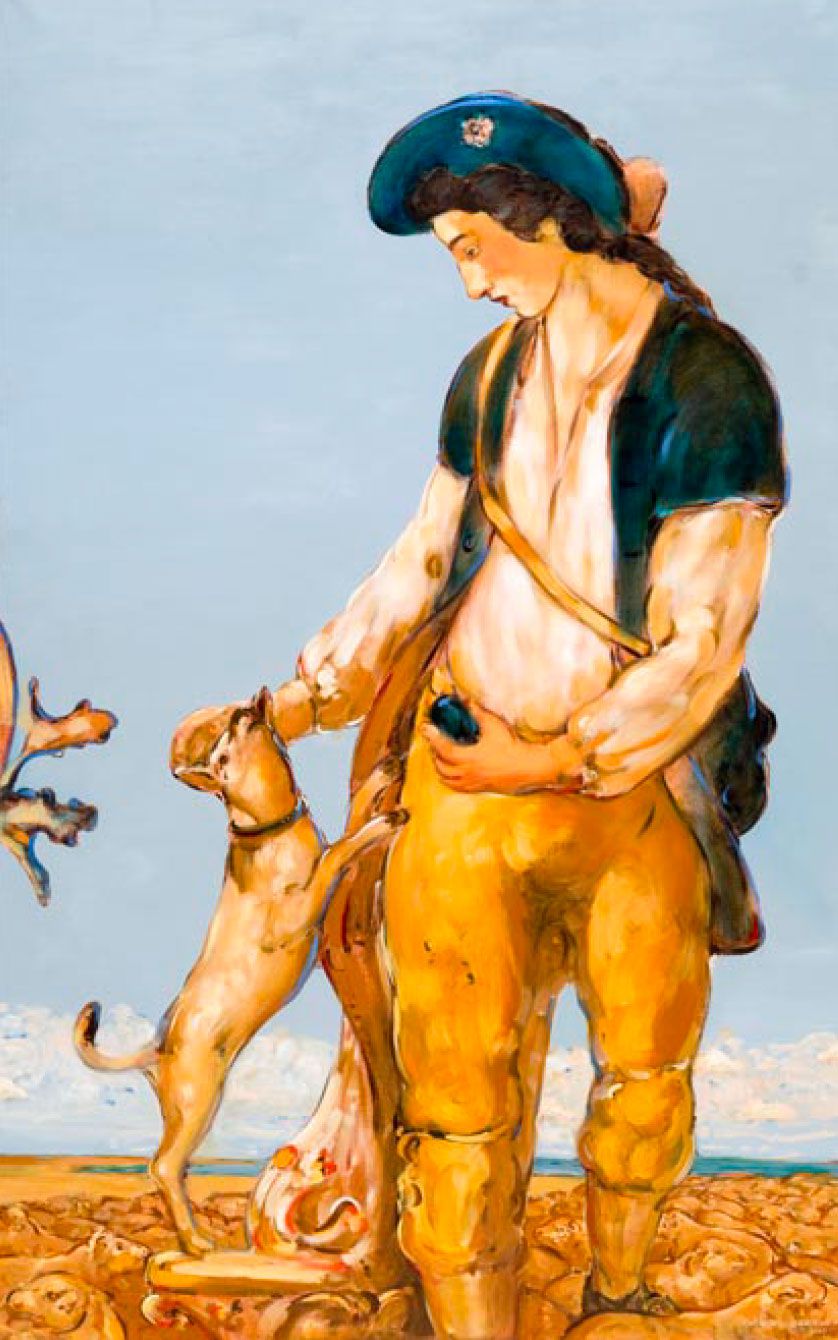 The 'entrée' of Bruno Griesel's 'Rococo' project is the 'Barberine Faun', a sculpture of an intoxicated sleeping satyr, which is considered a major work of Hellenistic Greek art. Brought to Rome in antiquity, the satyr served as a fountain figure in a Roman villa garden. Excavated in the early 17th century near Castel Sant'Angelo, the Barberini Pope Urban VIII had it installed in the family palace on the Quirinal. King Ludwig I of Bavaria succeeded in acquiring the famous sculpture in 1820.

Since 1830, the 'Barberini Faun' has been one of the great attractions of the Munich Glyptothek! Bruno Griesel has varied the antique sculpture and therefore included it in his 'Rococo' project because he refers to a copy by the great 18th century French sculptor - Edme Bouchardon (1698-1762) - which has been in the Louvre in Paris since 1892. Griesel's work is therefore a copy of a copy. The lush, swelling tendrils outside the frame on the left are intended to reinforce the "Rococo" reference. The most extensive part of his project is formed by the bal-lerines, graceful figures to which he has added quotations from famous horses, stags and unicorns from art history. With the dancers, Griesel suggests that ballet had its heyday in 18th-century France, before pointe dancing experienced a new high point in the Romantic full stop.

In ballet, the 18th century found a vivid symbol of the artificial, which had its indispensable counterpart in the natural. In the painting 'Autumn' Bruno Griesel shows this double nature of the "curlicue and shell" (Goethe) of the 18th century - a famous porcelain figure in the manner of Watteau. She is precious and at the same time wants to embody graceful simplicity. The gardener's group "Gardener and Boy" by Michel Victor Acier is fragmented and charmingly faceted by Griesel.