The sufferings of the light

After returning from his second trip to Italy in 1790, Goethe began intensive physical-optical colour studies. Goethe observed: "Everything in science depends on what is called an aperçu, on an awareness of what actually underlies the phenomena". Goethe's aperçu - in the literal sense of a conscious grasp of the correspondence between sensual and reflective experience - was a hurried look through a borrowed prism that a messenger from the owner reclaimed. To his astonishment, when he held the prism in front of his eye, the expected coloured fragmentation of the light did not occur; colours only appeared at the border of light and dark. "It did not take me long to realise that a light-dark boundary was necessary to produce colours, and I immediately said aloud to myself, as if by instinct, that the Newtonian doctrine was wrong.

" Goethe, only cursorily familiar with Newton's work, condemned his conception of the composition of white light as sacrilege and an attack on its true nature. Pure light - for Goethe the revelation of the divine - is eternal, unique and indivisible. The highest-energy light of the sun is worthy of worship as "the light and the begetting power of God, by which alone we live, weave and are" - this sunlight, when it reaches the eye, could not be other than indivisibly white. Only through its moderation in dull media would colours emerge: Yellow from white, blue from black, furthermore yellow-red from yellow and blue-red from blue. Green was a mixed colour of yellow and blue, pure red either a mixture of yellow-red and blue-red or the result of a further increase of yellow or blue. Goethe's theory of colour is in its roots actually a theory of light, whose claim to natural science causes difficulties. Goethe's most sacred concern goes beyond an aesthetic theory of colouring, an ordering scheme for artists.

Rather, his Theory of Colours was intended to be a paradigmatic blueprint for the study of nature and thus a challenge and counter-proposal to Newton's conception of natural science. Goethe's claim was bound to fail; neither to his contemporaries nor to later generations was Goethe the colour teacher a scientific authority. On the surface, Goethe's theoretical outline seems irreconcilably opposed to the tradition of modern natural science since Galileo, Descartes and Newton. However, Goethe's worldwide reputation as a poet and thinker prompted mathematicians, physicists and artists to engage with his theory of light. Goethe's statement on the conceptually judgemental grasp of sensuality and reflection is also a leitmotif that Bruno Griesel deals with in the series of works entitled "The Sufferings of Light".

As a colour researcher, Griesel "mixes" his colours against the pure white background of the picture support. He moderates them by clouding them or heightens them in the contrast of light and dark. Each colour remains simultaneous to the others, for direct mixing of the painterly, chemically limited colours does not produce white, but grey or black. The dispersive order of the works, continued in the series, does not allow grey to emerge either and resembles a rainbow in its spectral colourfulness of red, violet, blue, green and yellow (gold). The formal interplay of colours in Griesel's works is also a play on their sensual-moral (Goethe) or psychological effect. The synthesis of the struggle between light and dark, disharmony and refraction is harmony. Postmodern and contemporary art is driven by the principle of refraction of traditions and theories with the help of play in the intention of cognitive development.

As a contemporary, Bruno Griesel is equally driven by a playful and serious approach to traditional forms, styles and content. Since studying drawing and painting at the Leipzig Academy of Visual Arts in the 1980s with teachers Volker Stelzmann, Wolfgang Peuker and Bernhard Heisig, Griesel has been exploring a naturalistic and figurative style of painting. He discovered his love for Baroque painting and its associated genres (biblical history, devotional painting, portraiture), subjects (e.g. Judith and Holofernes, Perseus and Andromeda) and motifs (e.g. the Three Graces). Deep sensations and melting colourfulness were the painterly values of this period that so fascinate Griesel. Another source of inspiration for the deepening of mythological themes are the eclectics or renaissance artists from Bologna and Venice of the early 17th century, as Winkelmann calls them. But the incunabula of the avant-garde also inspire him to painterly experiments: Music, rhythm, dynamics combine with freely invented, geometric or abstract forms and a cognitive colourfulness, opening up broad fields of association in which "everything can stand for everything". With his painted black square in 1916/18, Kasimir Malevich founded the beginning of a new art movement, Suprematism. This radical reduction of painting to form and colour is still regarded as a signpost for the renewal of art and society and an icon of modernism.

Griesel repeatedly cites the purpose of abstract painting as an icon and means of prayer, i.e. the silent dialogue between the viewer and the sacred representative, in his paintings. Griesel sets his symbols and content against the backdrop of avant-garde art history, thus creating an exciting synthesis of abstract figuration or figurative abstraction. His intensive struggle with incunabula of art history and their apperceptive transfer to his work is an example of a form of traditionalism typical of Leipzig, which in its mysteriousness challenges the viewer time and again. In Griesel's colourful and at the same time sensitive depictions of landscapes as well as of women (dancers) and couples, the focus is not on the individual characterisation of the figures. Rather, they are actors of a spiritual attitude, expressions of composition, which in their determination show the simplification and typification of figurative form to elements of dance and movement, for example (e.g. Pas de trois, The Green Sisters, In the Circle - The Winter / - The Autumn / - The Summer and Couple on an overpainted gold ground). The mythological and biblical background against which the actors appear is, as it were, an aid to the painter's (and the recipient's) sensual and moral analysis, the result of which is not infrequently a thieving delight in moods, beauty and decoration. Asked about his conception of painting, Picabia replied, "It consists in forgetting it and seeing it as a visual pleasure, because in my opinion everything is decorative."

Many of Picabia's paintings therefore seem like photographic superimpositions, hedonistically decoding the history of art, with no particular predilections, at most for naked female bodies or lovers. Although not so radical, one field of association when looking at Griesel's works is connected with the concepts of kitsch and eclecticism. It is astonishing, then, that an artist of the younger generation like Griesel, despite all the thinking about modernism and anti-modernism and despite the awareness of the Bilderbe, ends up back with the fascination of painting. 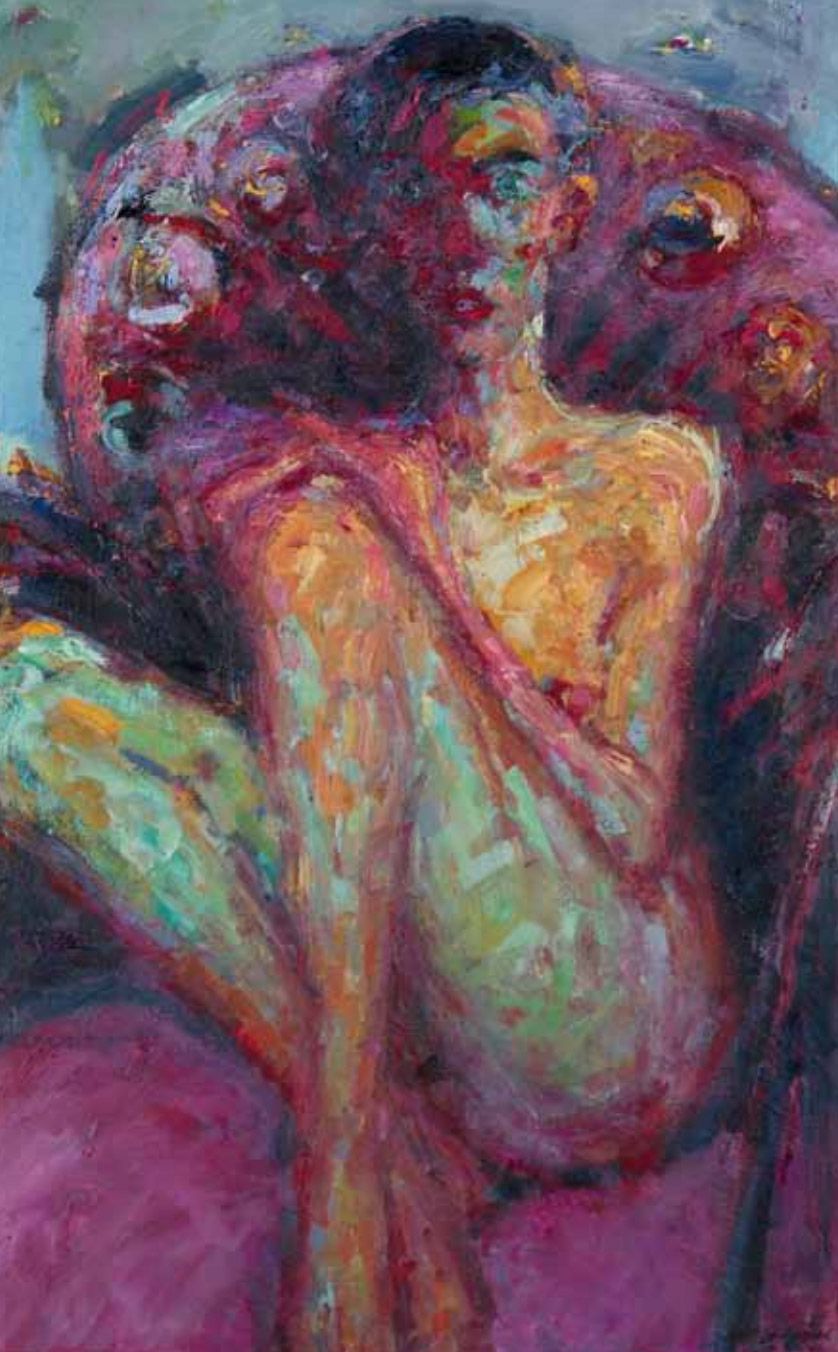 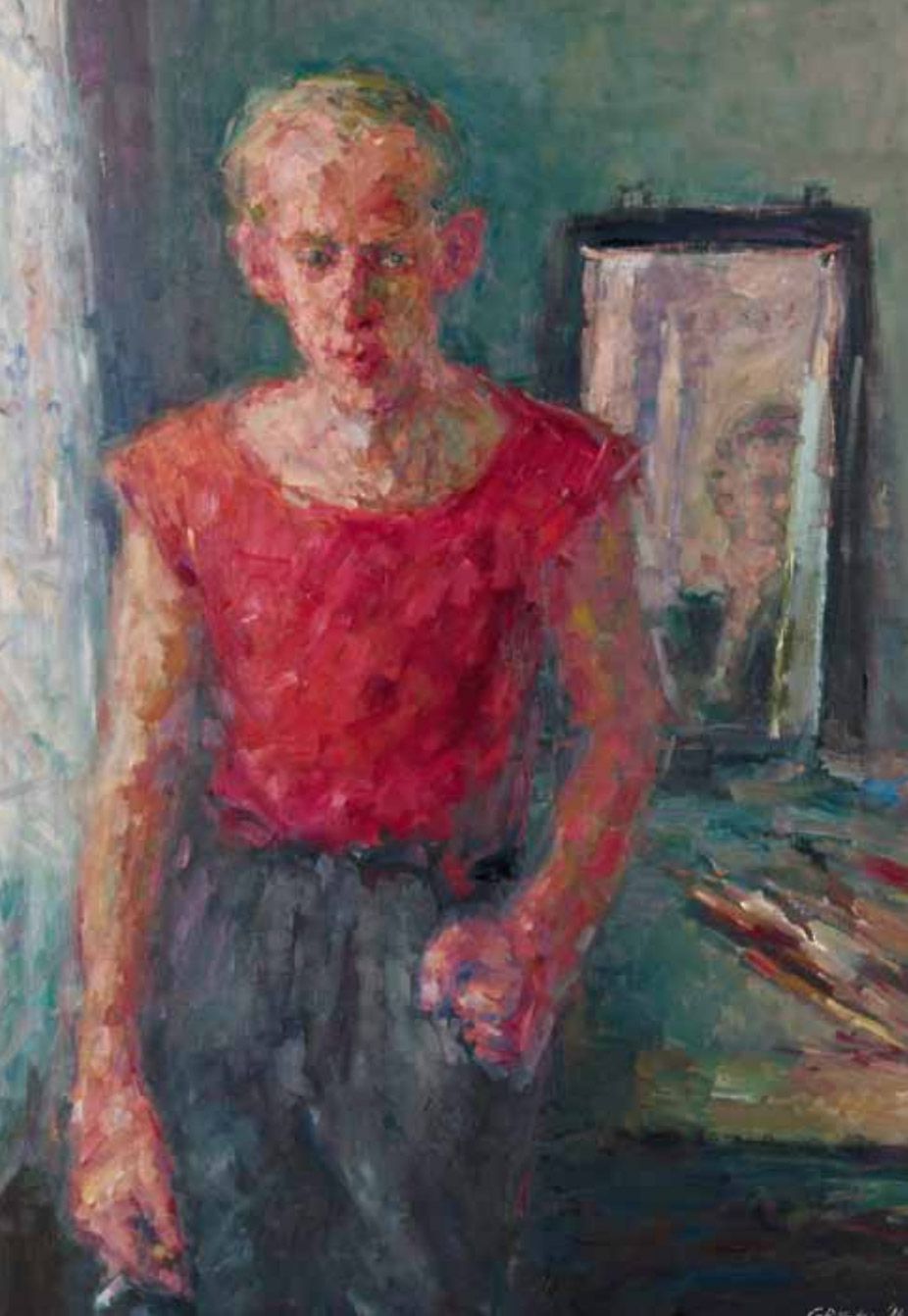 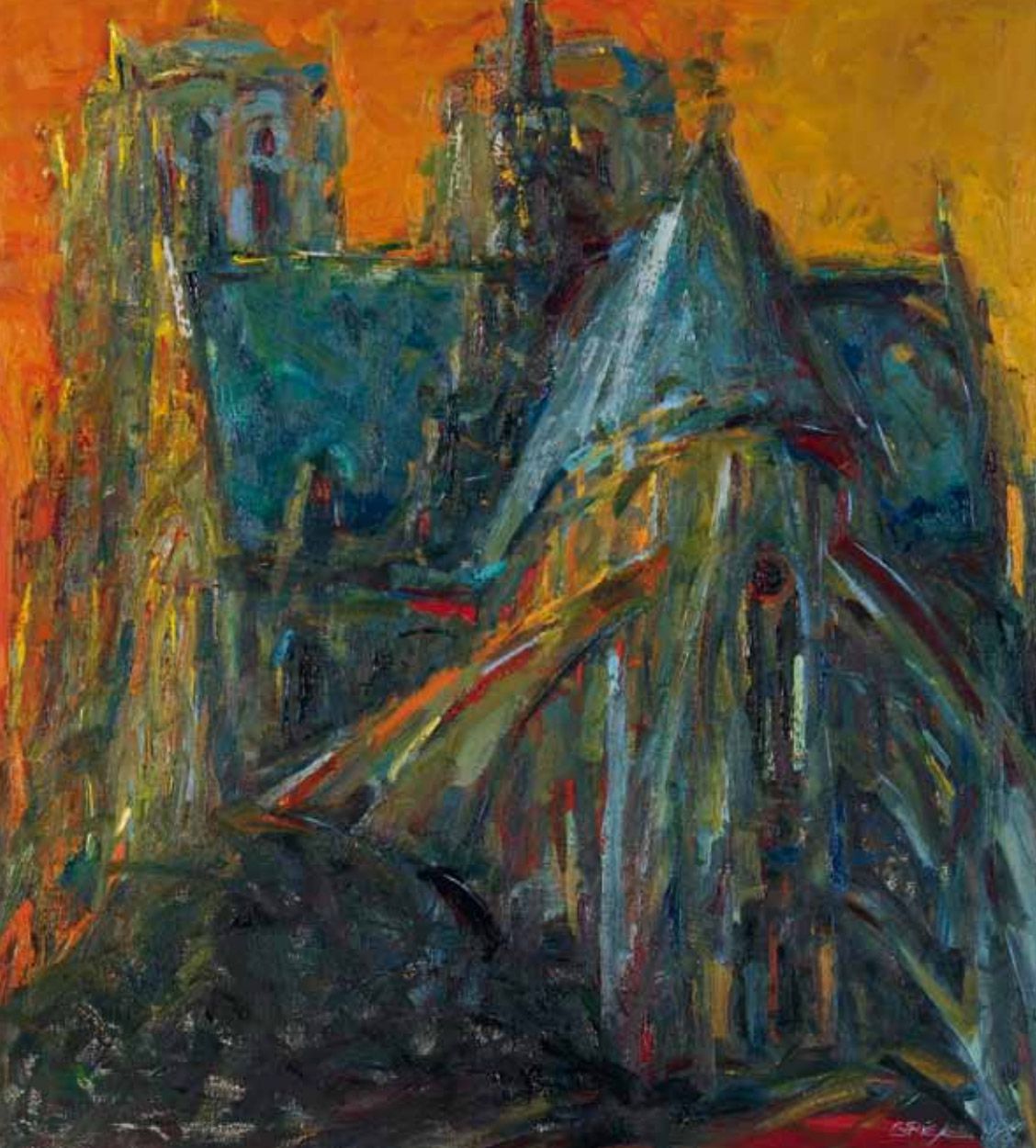 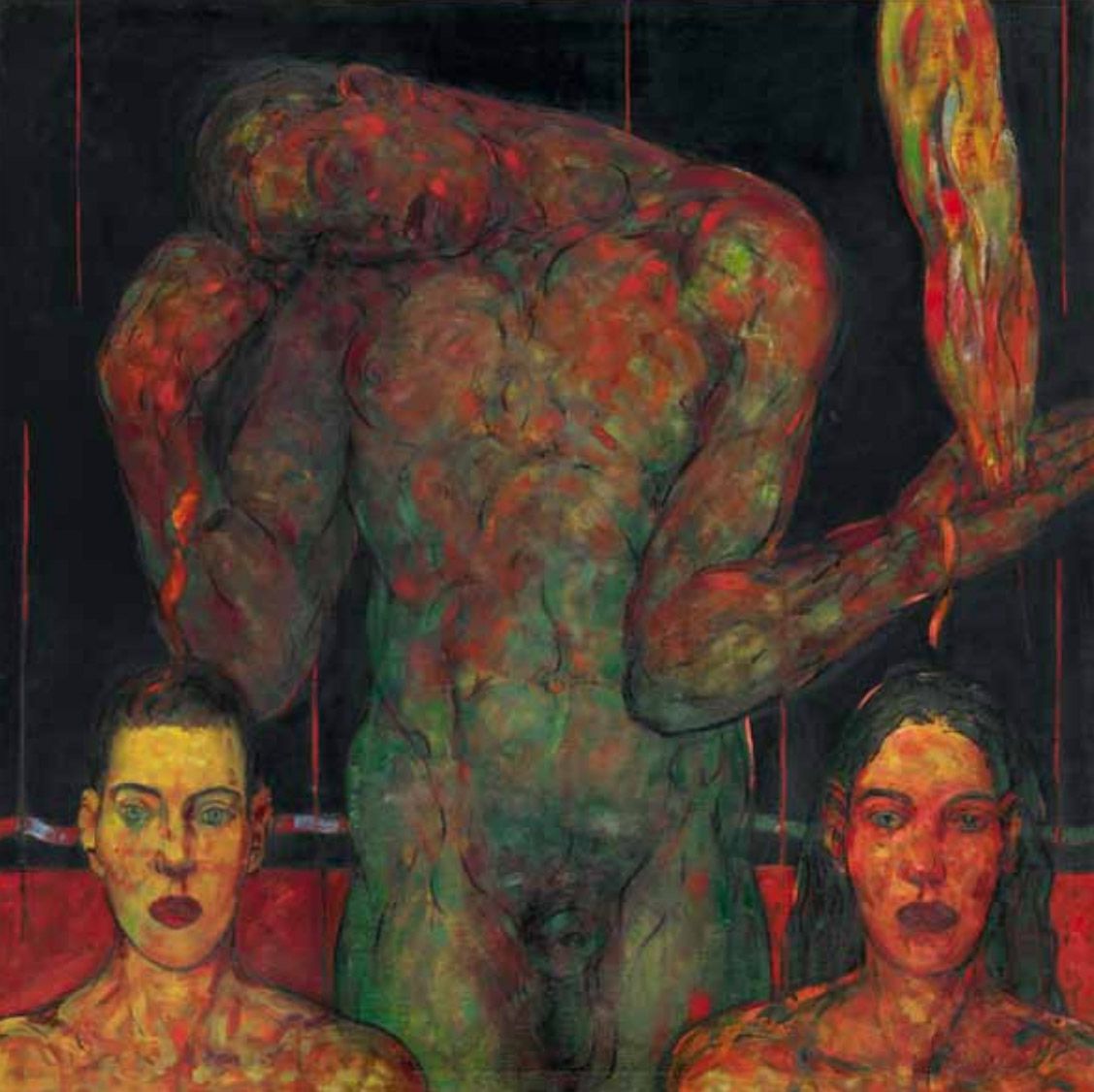 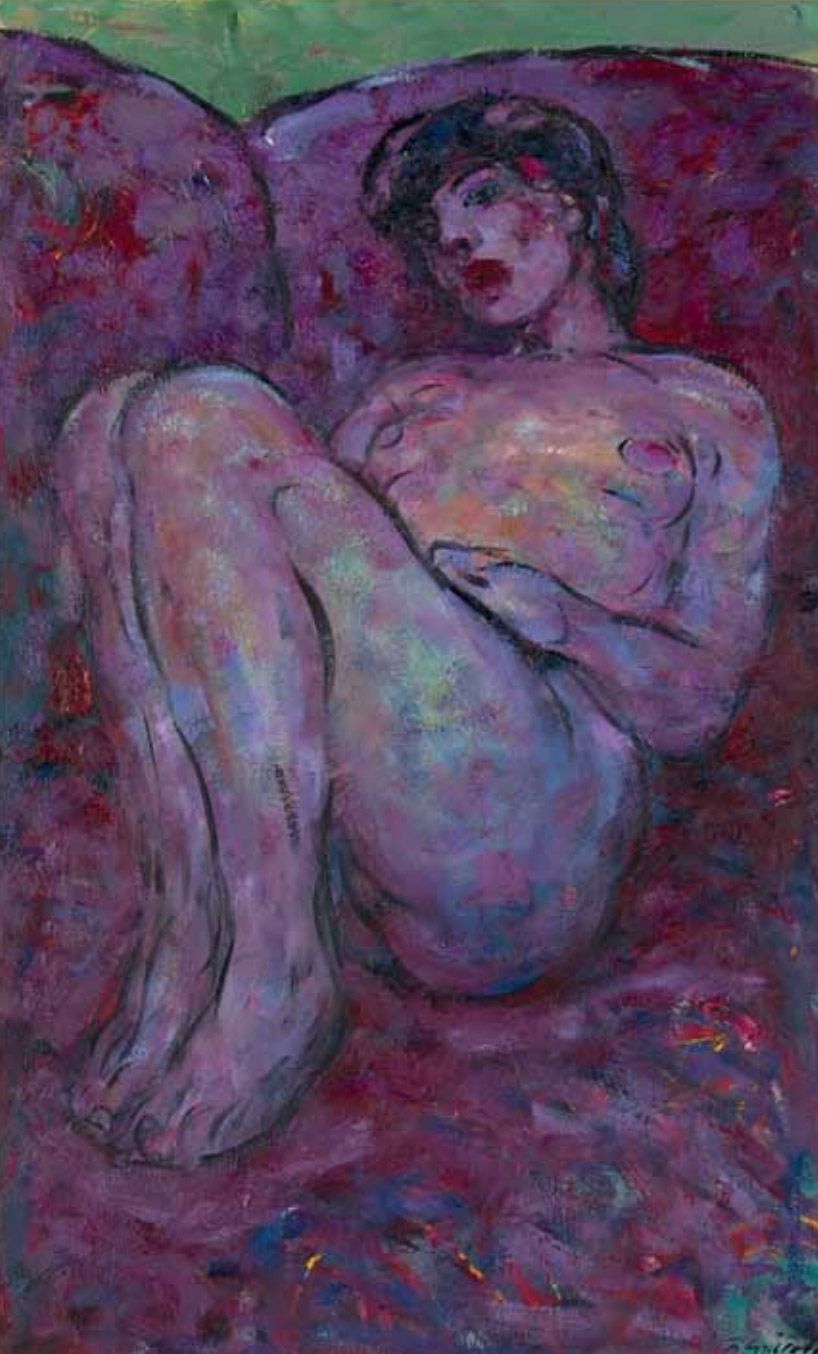 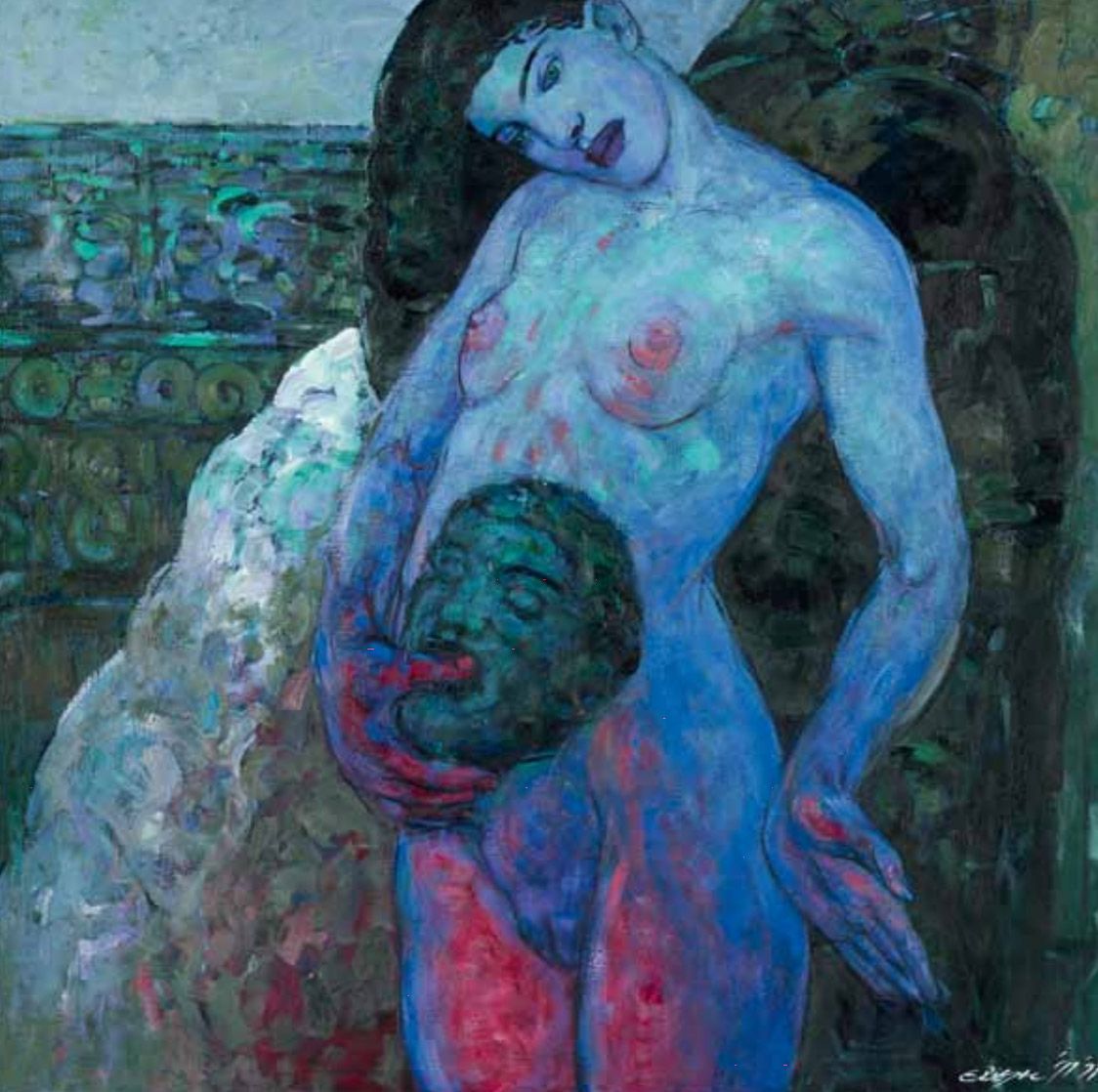 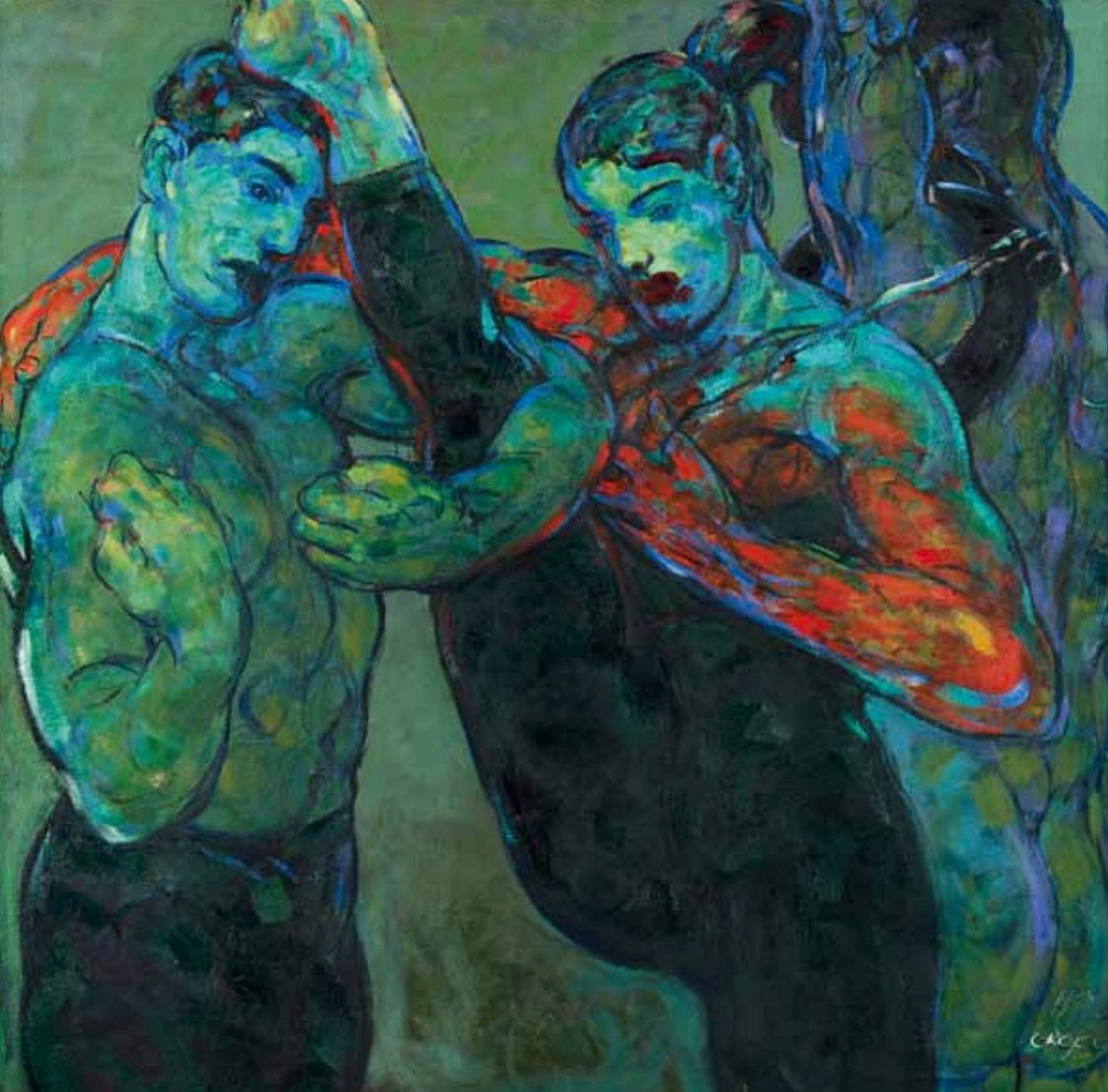 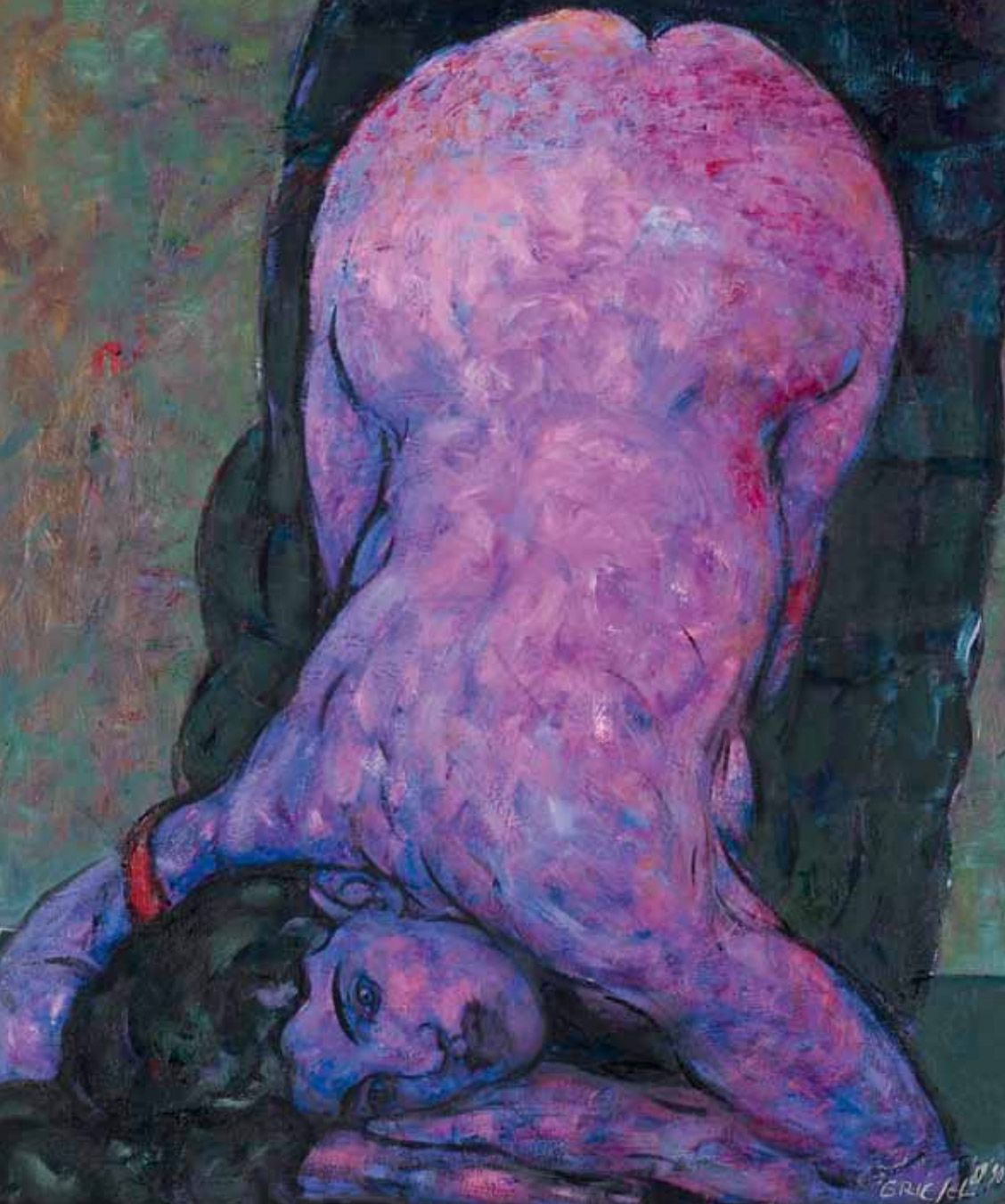 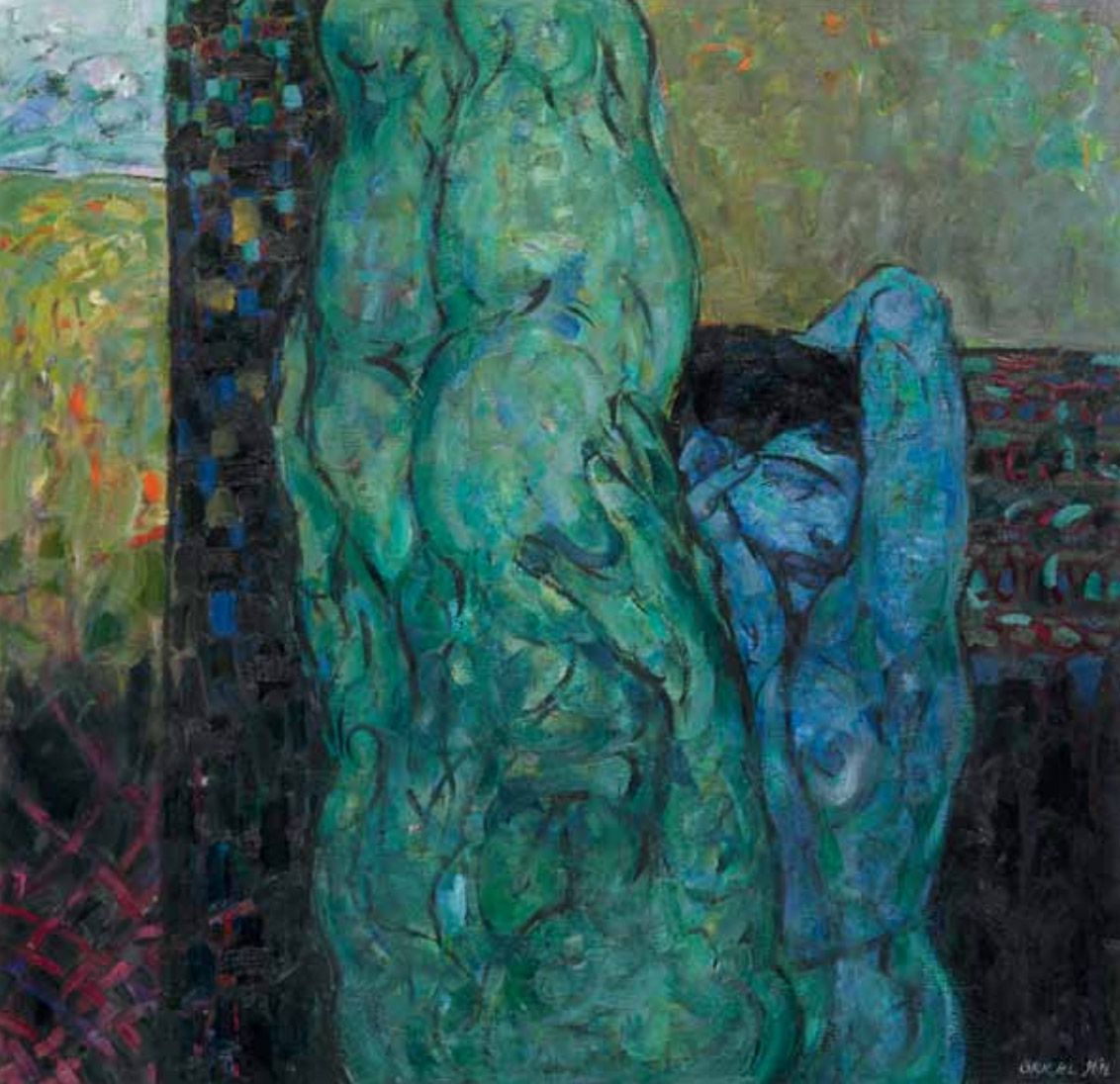 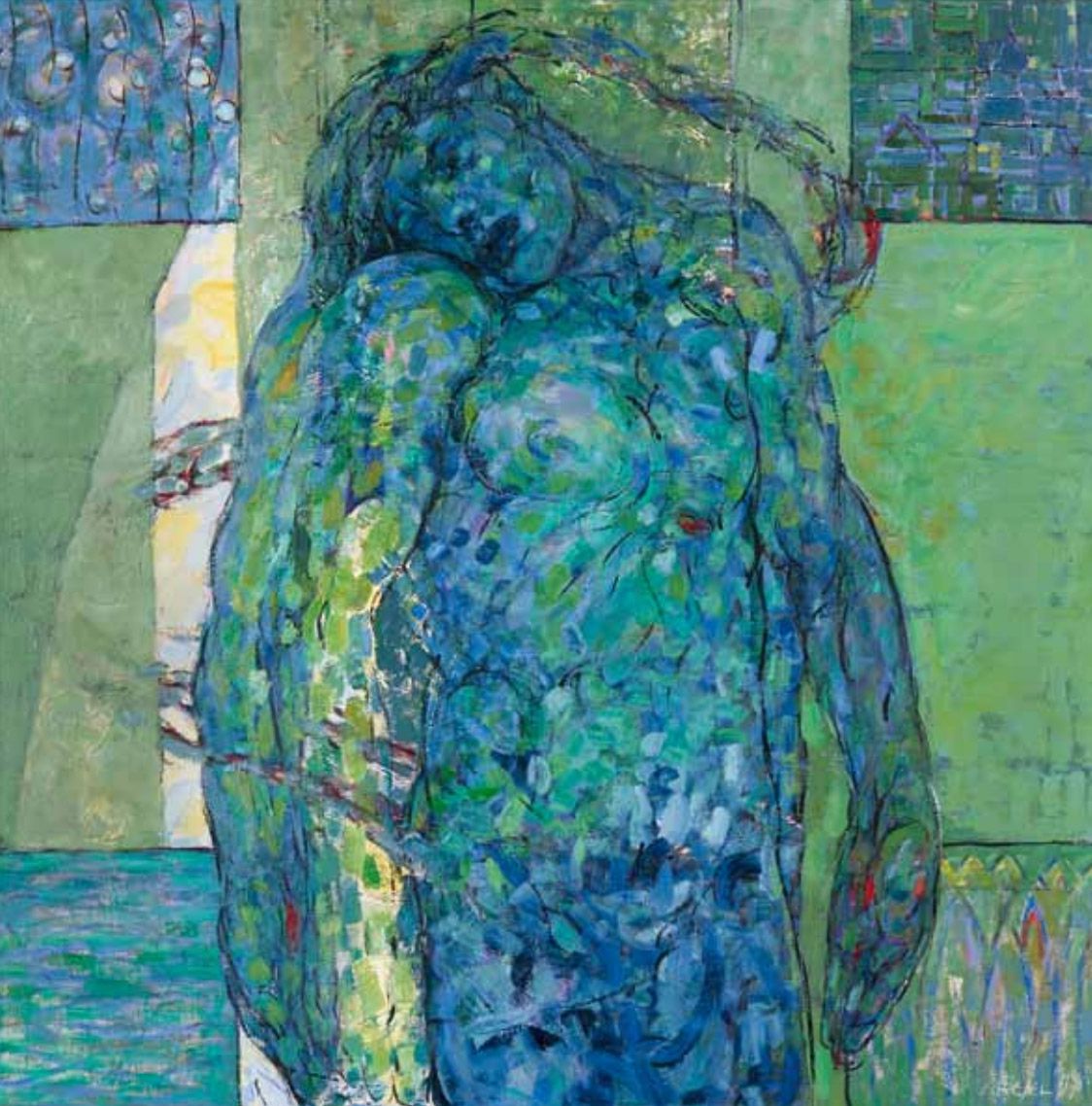 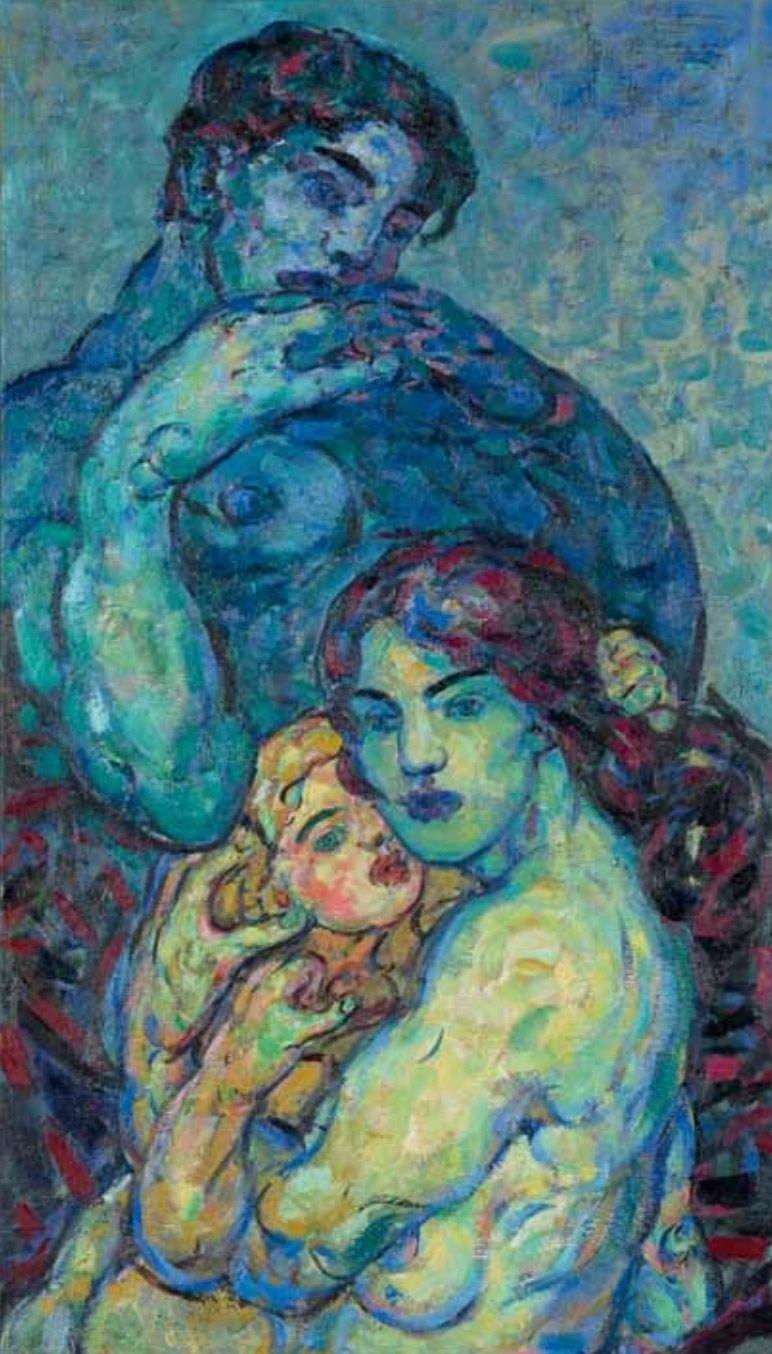 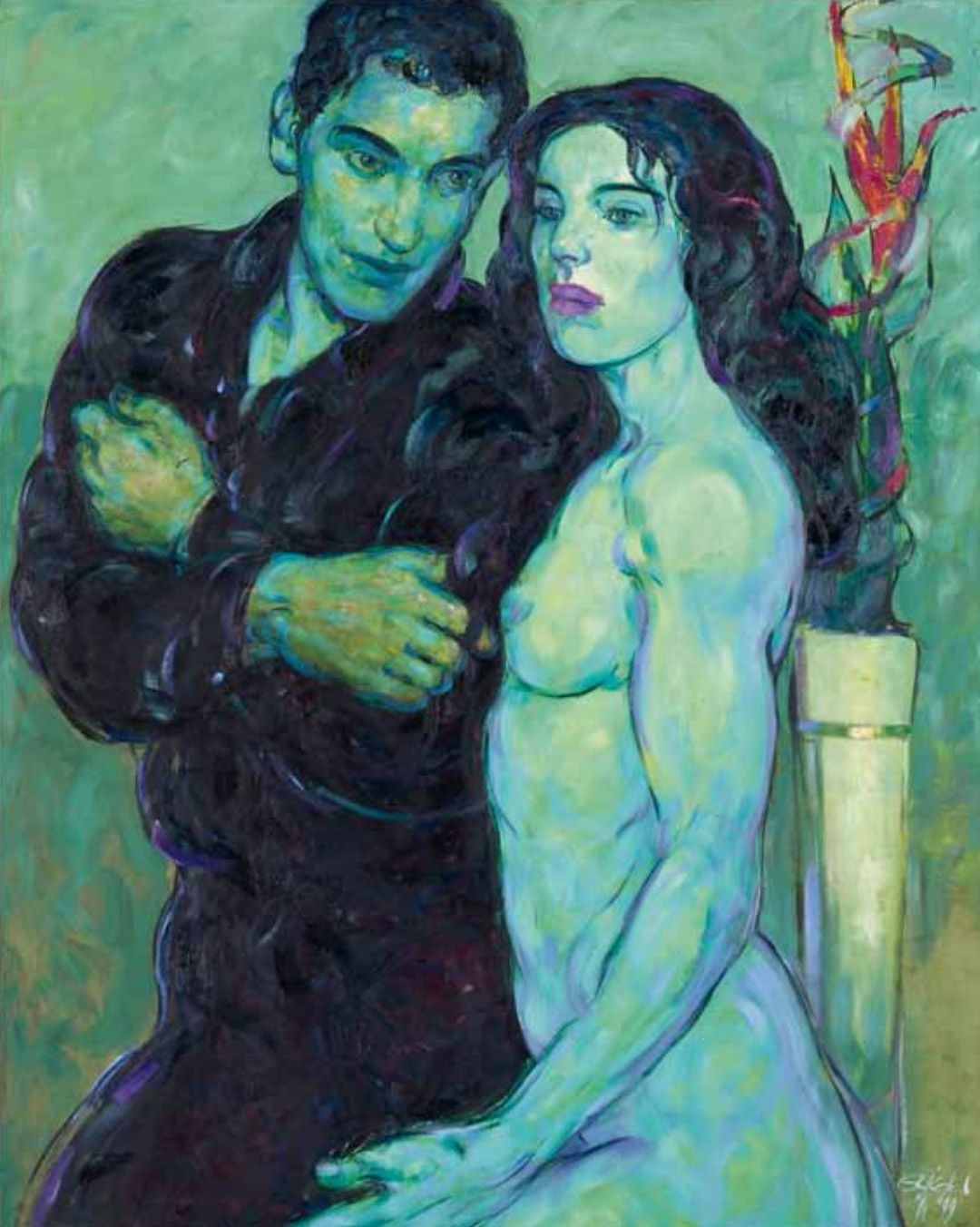 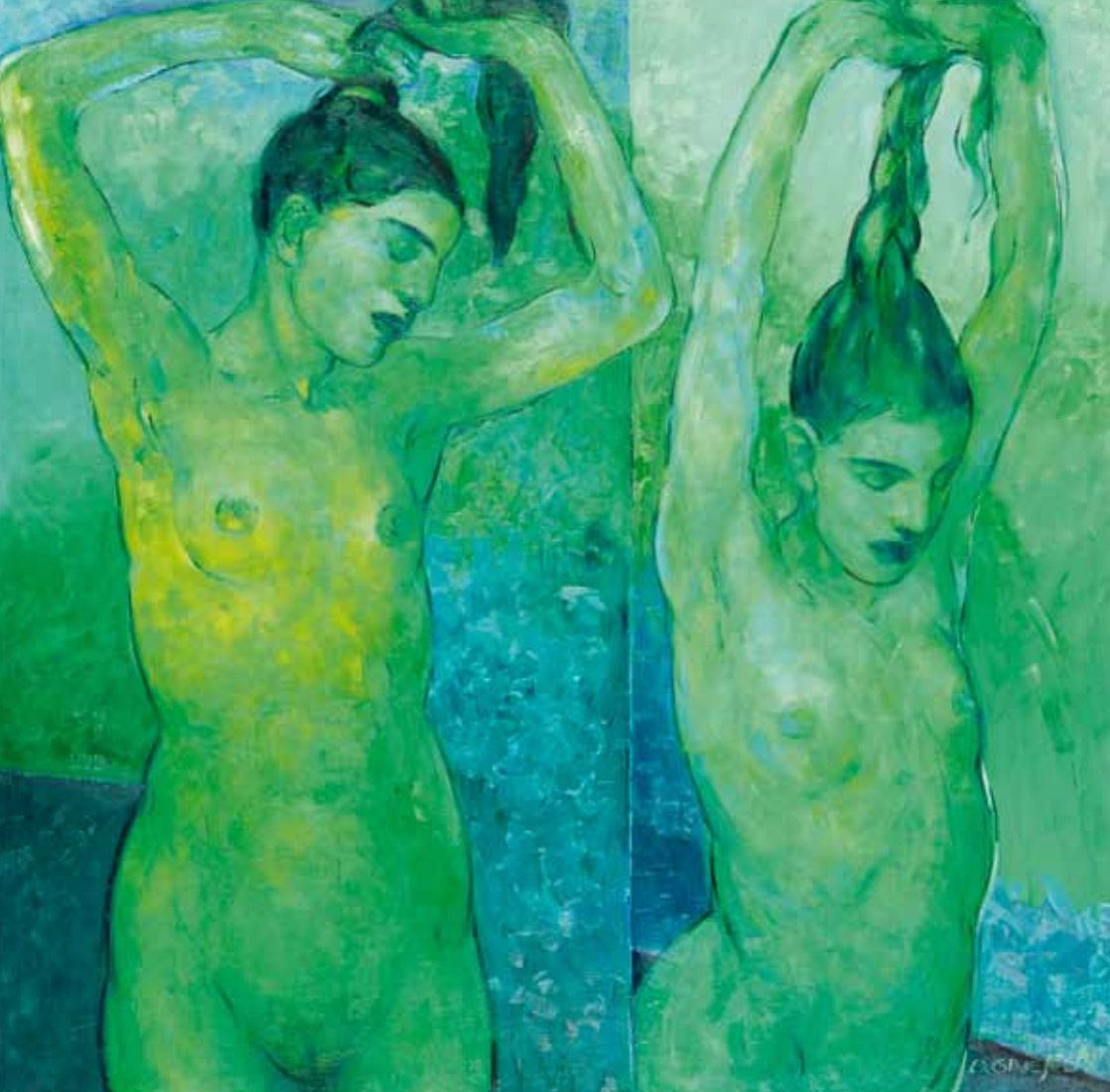 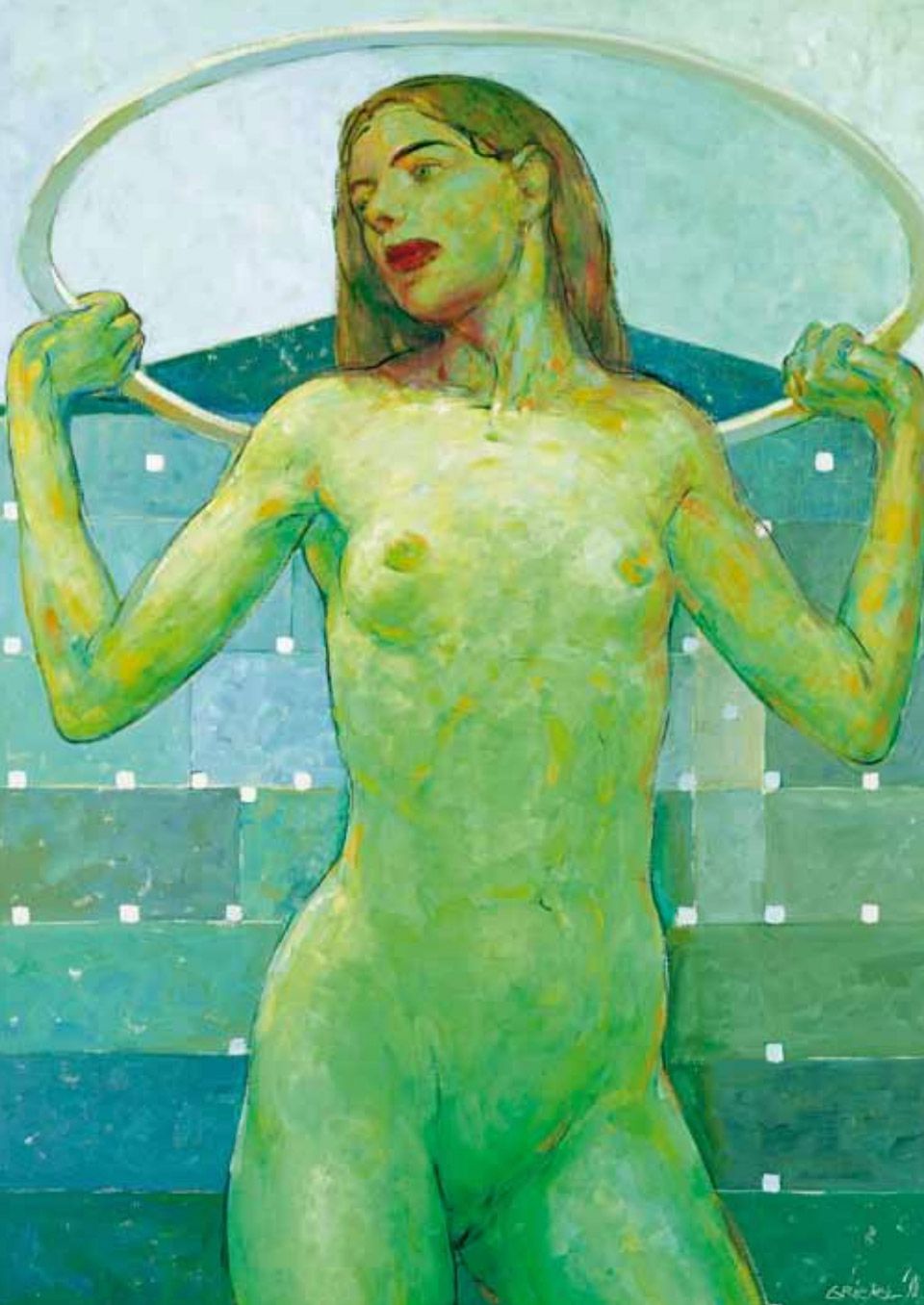 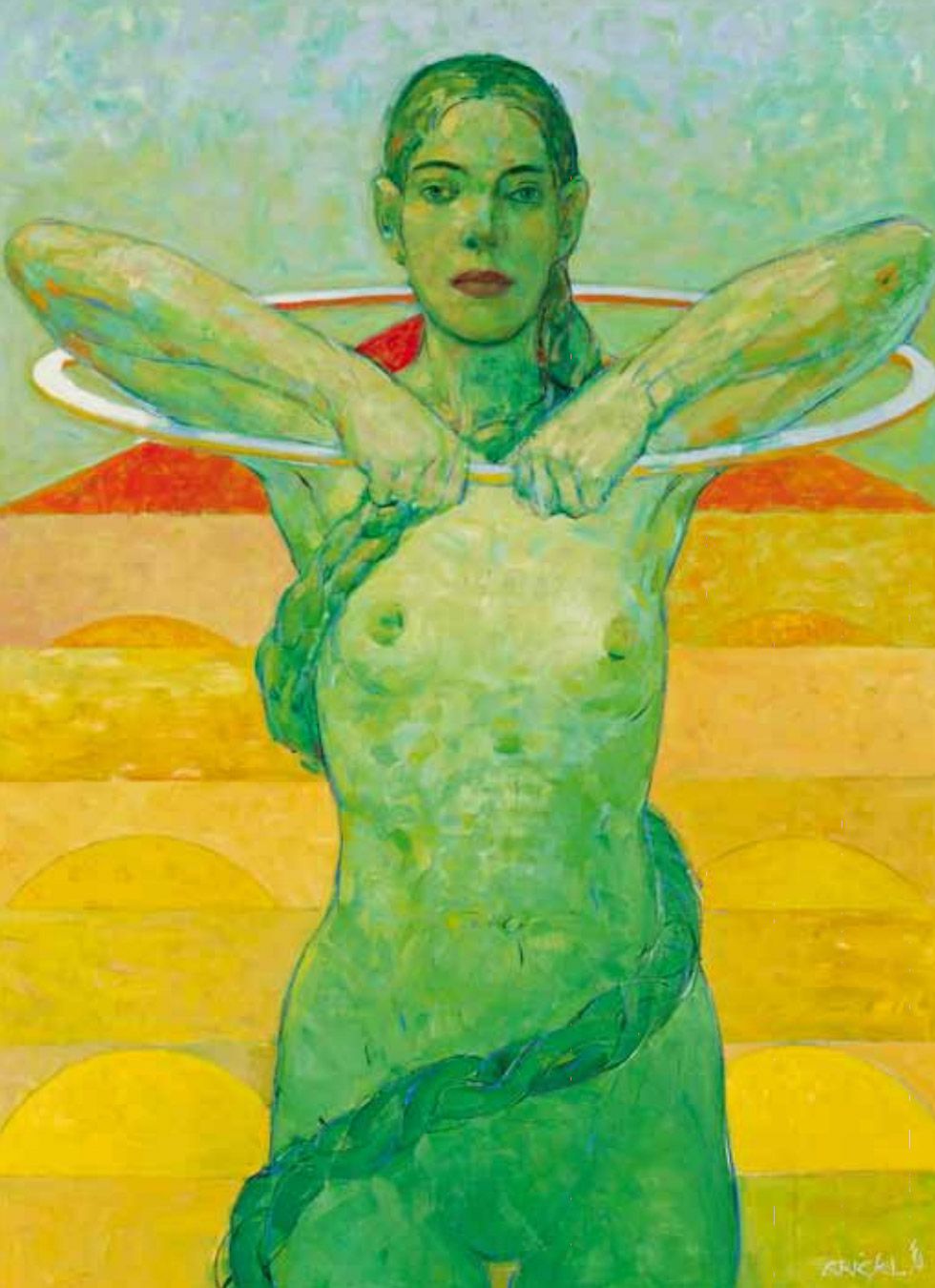 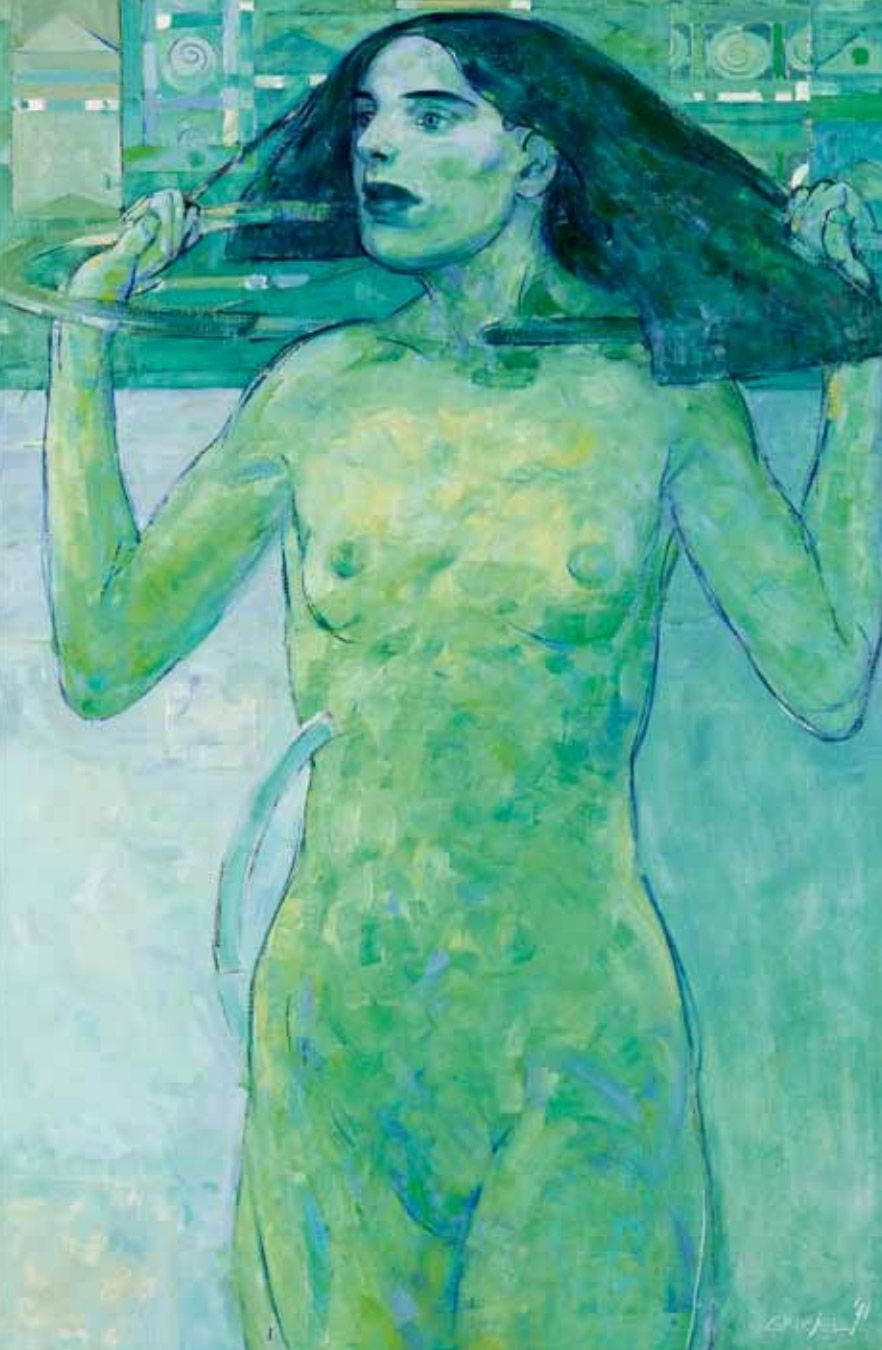 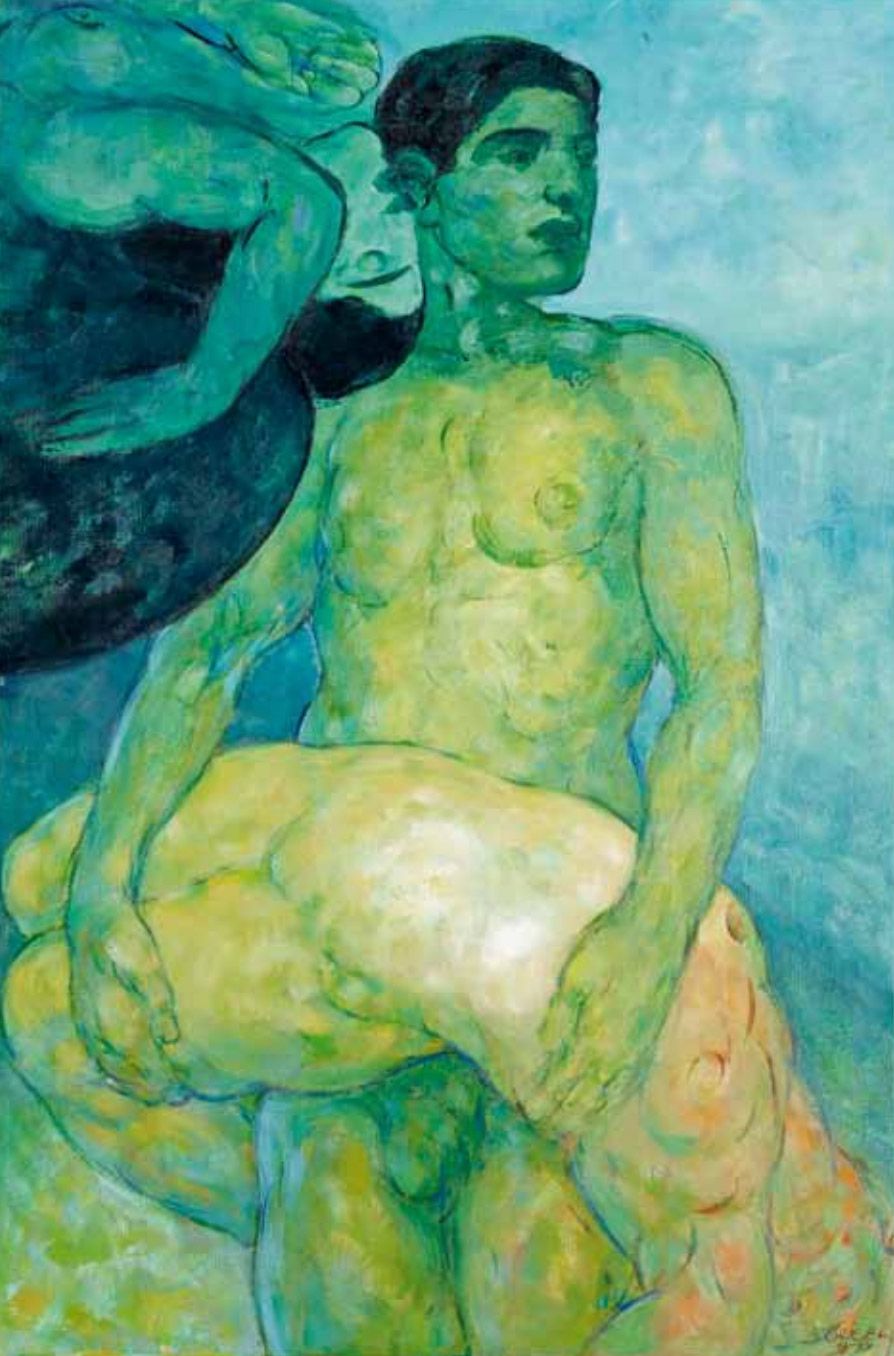 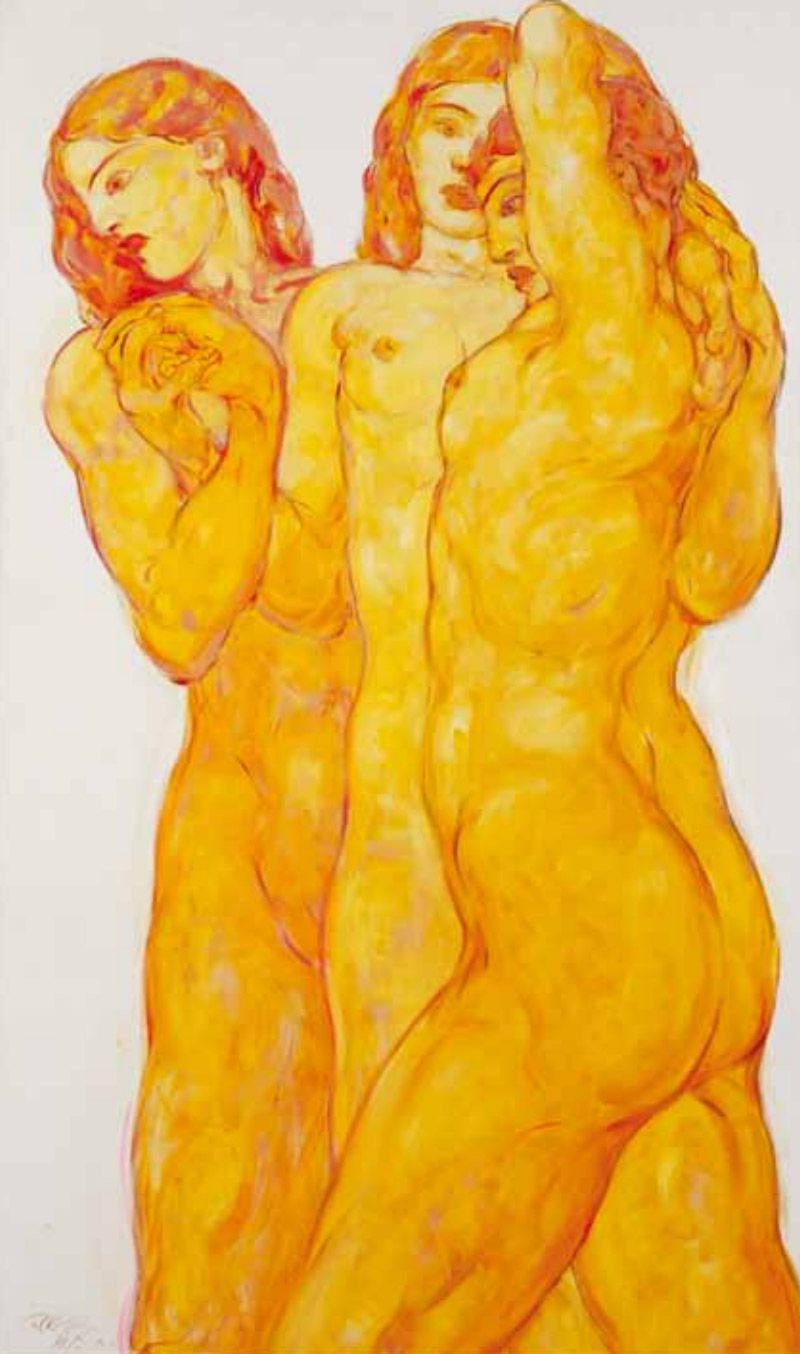 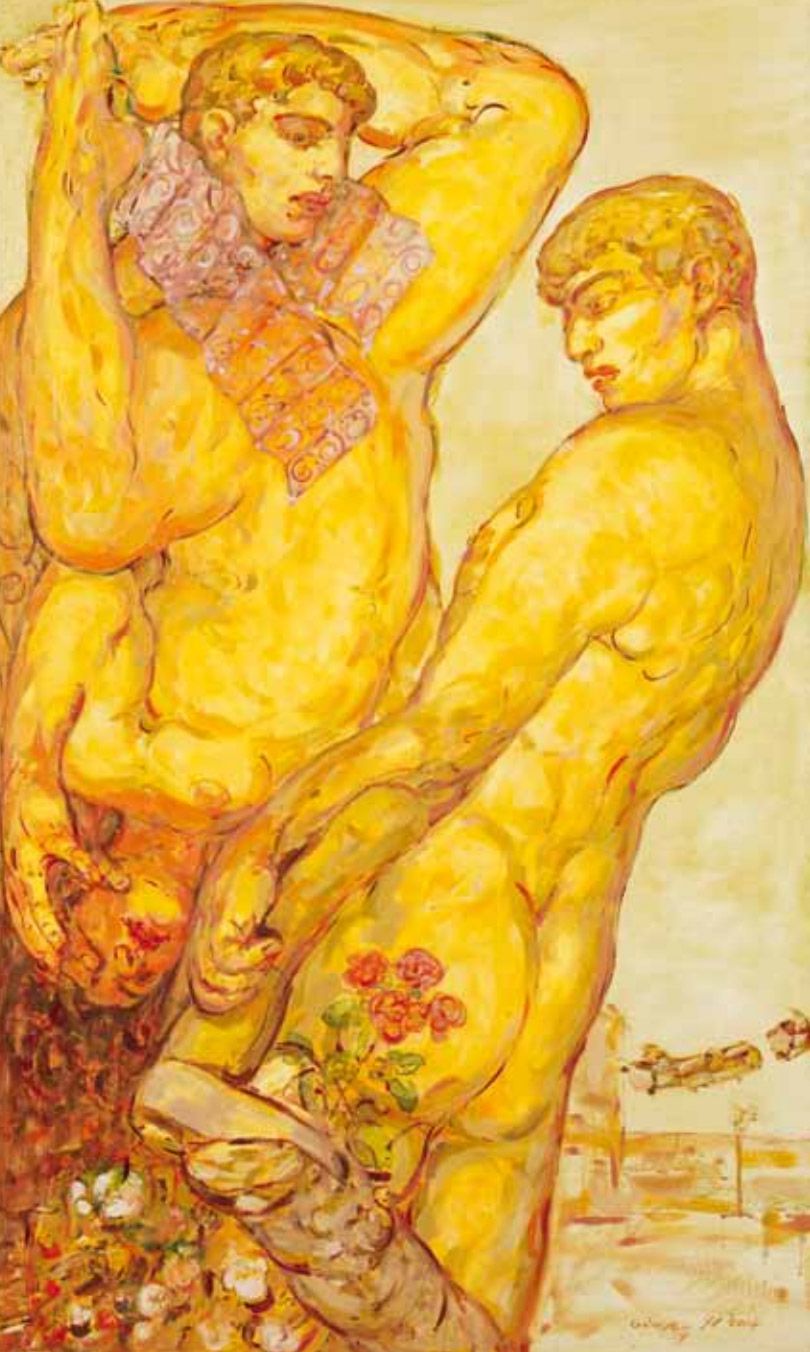 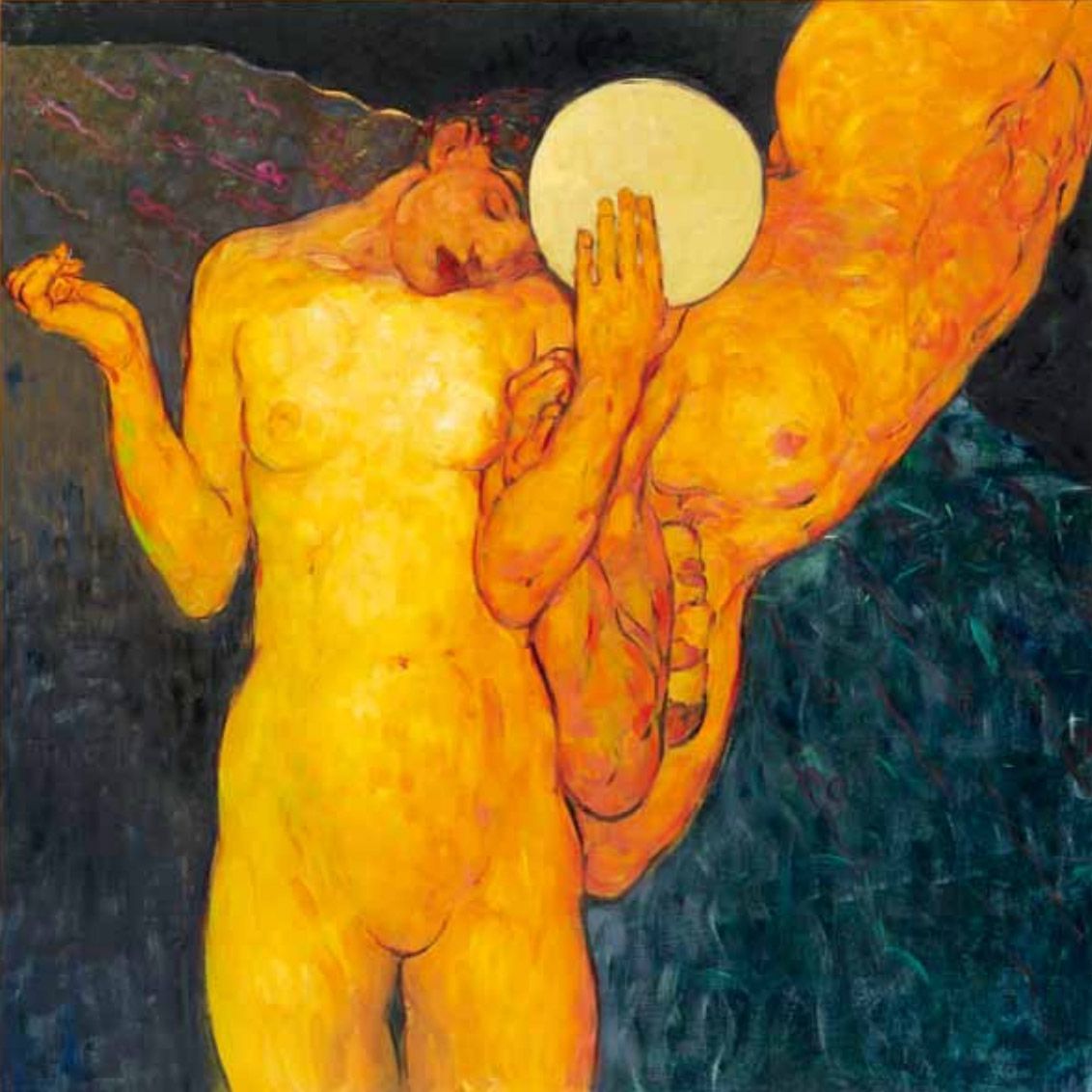 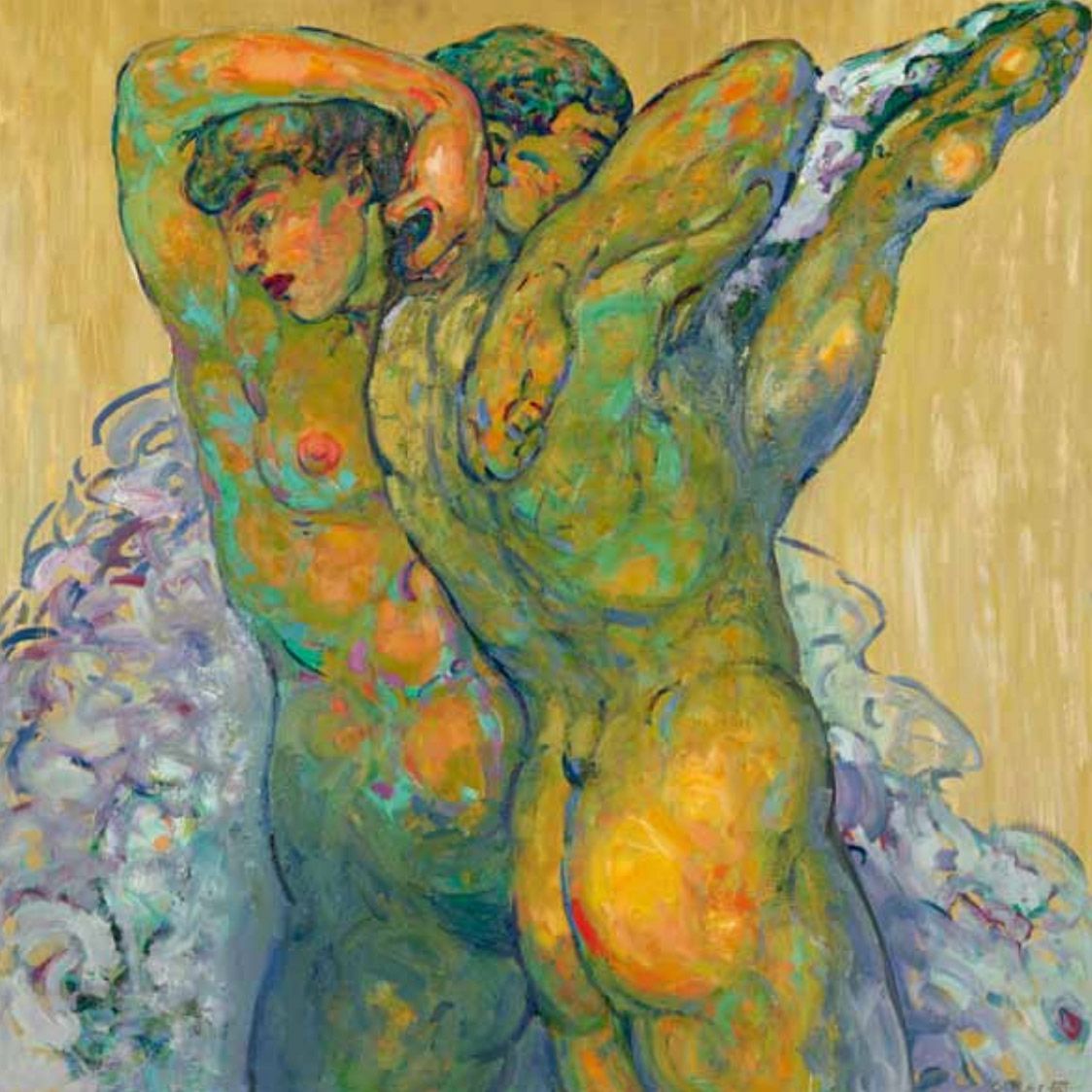